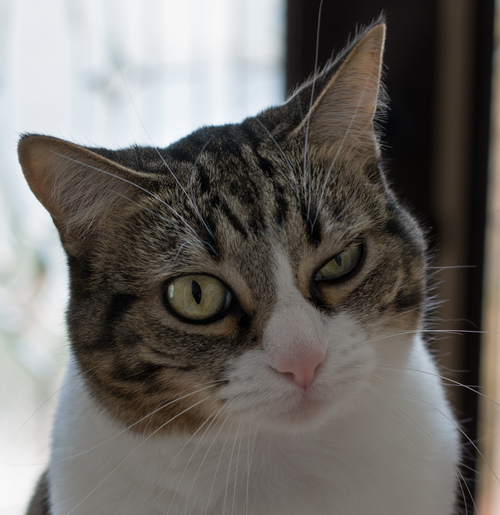 Psychocat Reads Reviews are brought to you by Newbie Writer Jen and her Psychocat. These weekly reviews will include Jen's ratings for a book (traditional star system) as well as Psychocat’s five claw system when she cooperates. Each review will include criteria specific to the genre, as well as any other key notes. Psychocat’s ratings will include far less logic.

(I received a free copy of this book in exchange for an honest review.)

Growing up in the KY countryside, I hated country music; however, a few college years in TX and five more in TN (Nashville) led to an appreciation for the genre. Years later, it has stuck with me. Of course, country singers, with their penchant for well-fitted jeans and t-shirts and often defined muscles, don't hurt the case for why a person should pay attention to the genre. ;)

With that in mind, MENDING HEARTSTRINGS seemed like a fantastic book choice. Let's see if this sweet romance managed to keep me hooked or left me wanting to change the tune.

The Characters: Sabella isn't looking for romance. In fact, she seems rather reluctant to consider it, but when the unexpected happens in Nashville she doesn't blow off the opportunity either. I really enjoyed her character. She isn't written as the lovesick female. She isn't waiting around to find Mr. Right so her life can start. She's independent and strong, pursuing her career, and has strong relationships with her close friends. Grant it, she's clearly been burned in the past, but I imagine few people haven't.

Kane is a bit on the other end of the spectrum from Sabella. While hesitant to trust thanks to being used in the past, he is a genuinely nice guy. He really reminded me of what you expect the classic country gentleman to be. Yes, he can have a good time with his friends. Yes, he might have enjoyed the ample women available to him as a rising celebrity. Yes, he might have made some less than stellar judgment calls, but the Kane we really see in the book is a bit more mature and doesn't make for a shabby leading man.

Gina, Sabella's best friend, plays an integral part in the story. Not only is she there for Sabella when needed, but her individual storyline contributes to the main story quite beautifully. I thought the author handled that piece quite well.

The Relationships: Kane and Sabella's story isn't one of those meet, fall in love, and hop in bed together all in one night. I actually really enjoyed that while things were still pretty quick in the beginning, the author did take her time with certain aspects of the relationship.

As I mentioned above, Gina plays an important role in the book. The close friendship between her and Sabella is woven steadily throughout the book, and at times steps into the main spotlight. While in some books that could be a distraction from the main plot, this time it really works.

Too Perfect or Perfectly Flawed: One great night in Nashville does not make for a simplified fairy tale ending. If these two want a romance, they're going to have to fight for it. And even as they do, there's no guarantee the ghosts of their past aren't going to cause some major issues for them. Aria Glazki makes her characters work for it, and that keeps you hooked.

Jen's Final Review: 4.5 STARS!! MENDING HEARTSTRINGS is a splendid romance read. It's a great choice for someone that wants more character driven plot as opposed to hot and steamy. With fun characters, a few twists in the plot, and plenty of emotion, I recommend checking it out.

Psychocat's Final Review: There were a few things in MENDING HEARTSTRINGS that got her hackles up. One character in particular (remaining unnamed to avoid spoilers) should really watch their back (or any exposed areas) if they ever encounter her. 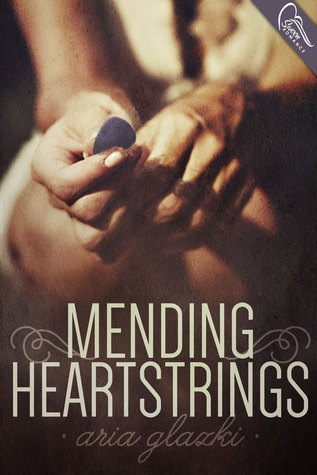 Kane’s a country singer who’s tangled with too many deceitful women. He’s learned his lesson: girls are for flirting and fun; emotions are for his music. But after spending a night with an earnest woman unlike any he’s known, he can’t force her out of his mind. So he goes in search of the woman he knows only as “Elle.”

On her last night in Nashville, the staunchly pragmatic Sabella found herself in a situation more suited to a romance novel than reality. Swept away, she ignored her rigidly self-imposed rules, succumbing to the fantasy just this once. But she knows real-world relationships have nothing in common with their fictionalized portrayals. When Kane unexpectedly shows up at her Portland apartment, she must choose between the practical truths she has learned and the desire for a passionate love she has struggled to suppress.

Despite the distance, Kane’s tour schedule, and their meddling friends, both are drawn to the chance for a romance neither quite believes is possible.