Did you know that leopards are an endangered species and that there are some species of leopard in which there are only a handful left in existence? 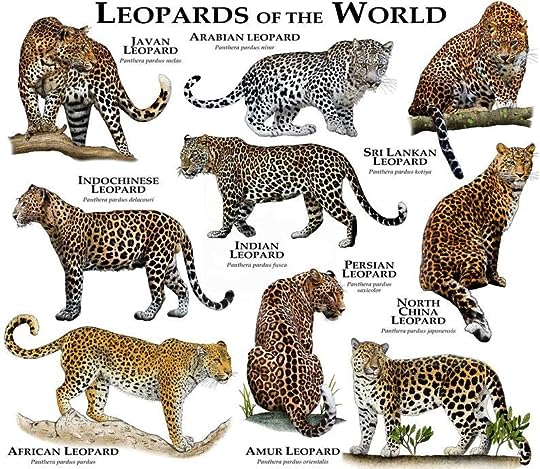 The Strawberry leopard has light brown and even red rosettes and pinkish pelts. Flambe, the heroine in Leopard’s Rage is a Strawberry leopard and she’s highly sought after for more reasons than one. It is a species of leopard with a mutation that caused the color to change in the rosettes.

Leopards can be found throughout Africa and Asia. You can find them in Russian, Korea, China, India and Malaysia.

It's important to me to highlight these majestic and endangered animals. I want people to love and admire them. I hope people fall in love with leopards and care about what happens to them.
22 likes · Like  •  7 comments  •  flag

Are you planning to include Indian Leopard ever in the upcoming books of this series? Curious to know about that...

It's sad that animals of any kind are disregarded so easily that people will hunt them to extinction for sport or poaching or even just for the habitat they need to survive. Sometimes I just wish you could switch their places & see how they like being hunted like that!

Thanks for sharing this! I knew leopards we endangered, but I didn't know some of these species existed, and now here how close they are coming breaks my heart!

Keep doing what you're doing, I love everything thing you do!

Thank you for this! and while everyone knows poaching is a top threat to leopards, I feel like so many people overlook the dangers of human expansion into areas where these animals live. We do just as much damage, if not more, when we push further and further into their habitat/hunting range. Guyana, Suriname, and French Guiana (between them) have the 70% rainforest cover in their countries, perfect for leopards.....Additionally; there’s all kinds of groups called the “maroon” (runaway slaves) who live in the jungle for hundreds of years. *cough cough* it’s not totally impossible they were leopards in Africa and are now in S America. Just saying!!!!

That's true. It's also the biggest part of global warming. The more of the rainforests disappear the less we have of cooling air in our ozone layer. Trees make our air but people seem to forget that sometimes, along with the animals that live in the forests.