Ashamed Who Am I Talking To 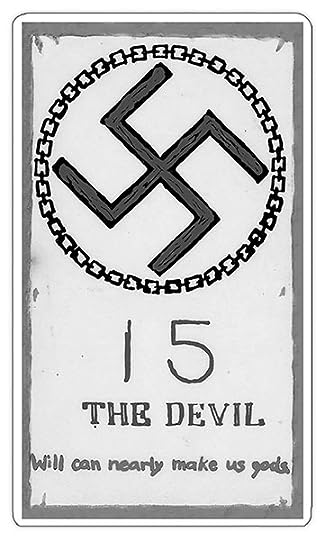 This is a tarot card where the very first rough sketch, a concept that struck immediately at the very conception of the whole deck project, sketched on unsuitable paper at a software engineering desk, without even changing my writing instrument or adjusting my lamp or shifting in my seat, that sketch was finally used as-it-is in the published product whose subsequent edition is now available just a few clicks away from you today. I've always known the Devil is a Fascist.

Orignal art: 4.5 x 2.5 inches, extra-fine marker pen on xerox paper, 1979. A poster with tattered edges shows the Nazi swastika wreathed by iron chain. The Devil is announced and numbered “15”. An explanation lettered under that says “Will can nearly make us gods.” It's an obvious pun on the infamous propaganda movie.

Here in the U.S., with Tarot readers whom I have talked with on the subject, for them, when the Devil card appears in your reading its big primary meaning will be SELF-DECEIT. Self-deceit primarily or only, that's what the card tokens, not evil and danger from outside yourself.

AS EXAMPLE of that principle A RIDDLE…
QUESTION… What is it called when the field of human events somewhere is utterly overrun by huge devouring machines built out of congealed money?
ANSWER… Surely that is called FASCISM.

AND ALSO… As all sane adults know, MONEY does not exist anywhere outside the human mind.

THEREFORE… Money is the Devil.

I also thought this Devil sketch would be an imitation of the historical real Nazi campaign posters, the real ones, the campaign posters back in their day in 1930's Germany. I have seen some of those and I made an attempt to display their style.

Those posters then were in a melodramatic and Brutalist looking style, quite pleasantly invigorating for excited stupid hateful people.

Countless of the sheets, truckloads of them in two colors and in three or four alternating graphic designs, they were stuck up on lampposts all over the whole damn country, in the election when Hitler mastered the country.

My fine pen moving on the transfulgent paper, I was imagining my sketch as being back then, as being one of those sketches for that.

But now, instead, let's imagine how much money bankers and treasurers must have conjured up from poor people's blood for Hitler for that campaign. And as we know, money is the devil.

A poet writing essays. Why the title? You know you keep a large size shoe box with all those creative ideas and suchlike stuff scribbled on the back of electric bill envelopes?