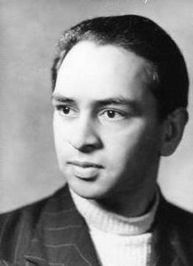 Born
in Peshawar, British India
December 12, 1905
Died
September 28, 2004
Genre
Literature & Fiction
edit data
Mulk Raj Anand was an Indian writer in English, notable for his depiction of the lives of the poorer castes in traditional Indian society. One of the pioneers of Indo-Anglian fiction, he, together with R. K. Narayan, Ahmad Ali and Raja Rao, was one of the first India-based writers in English to gain an international readership. Anand is admired for his novels and short stories, which have acquired the status of being classic works of modern Indian English literature, noted for their perceptive insight into the lives of the oppressed and their analyses of impoverishment, exploitation and misfortune. He is also notable for being among the first writers to incorporate Punjabi and Hindustani idioms into English

“Charat Singh was feeling kind, though he did not relax the grin which symbolized six thousand years of racial and class superiority.”
― Mulk Raj Anand, Untouchable
8 likes
Like

“How queer, the Hindus don’t feed their cows although they call the cow “mother”!’ Bakha thought.”
― Mulk Raj Anand, Untouchable
7 likes
Like

“The hand of nature was stretching itself out towards him, for the tall grass on the slopes of the Bulashah Hills was in sight, and he had opened his heart to it, lifted by the cool breeze that wafted him away from the crowds, the ugliness and the noise of the outcastes' street. He looked across at the swaying loveliness before him and the little hillocks over which it spread under a sunny sky, so transcendingly blue and beautiful that he felt like standing dumb and motionless before it. He listened to the incoherent whistling of the shrubs. They were the voices he knew so well. He was glad that his friends were ahead of him and that the thrum was not broken, for the curve of his soul seemed to bend over the heights, straining to woo nature in solitude and silence. It seemed to him he would be unhappy if he heard even one human voice. His inside seemed to know that it wouldn't be soothed if there were the slightest obstruction between him and the outer world. It didn't even occur to him to ask why he had come here. He was just swamped by the merest fringe of the magnificent fields that spread before him. He had been startled into an awareness of the mystery of vegetable moods.”
― Mulk Raj Anand, Untouchable
tags: awareness, landscape, mood
2 likes
Like

Which book should we read for the December Standalone Group Read

The Cat Who Came for Christmas by Cleveland Amory
15 votes 25.4%