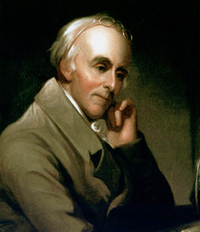 Born
in Township of Byberry (now part of Philadelphia), The United States
January 04, 1746
Died
April 19, 1813
edit data
Benjamin Rush (January 4, 1746 [O.S. December 24, 1745] – April 19, 1813) was a Founding Father of the United States. Rush was a physician, politician, social reformer, educator and humanitarian. He was the founder of Dickinson College in Carlisle, Pennsylvania.

“It would seem from this fact, that man is naturally a wild animal, and that when taken from the woods, he is never happy in his natural state, 'till he returns to them again.”
― Benjamin Rush, A Memorial Containing Travels Through Life or Sundry Incidents in the Life of Dr Benjamin Rush
tags: forest, nature, society, woods
53 likes
Like

“The only foundation for a useful education in a republic is to be laid in religion. Without this there can be no virtue, and without virtue there can be no liberty; and liberty is the object and life of all republican governments....We waste so much time and money in punishing crimes, and take so little pains to prevent them. We profess to be republicans, and yet we neglect the only means of establishing and perpetuating our republican forms of government, that is, the universal education of our youth in the principles of Christianity, by means of the Bible; for this divine book, above all others favors that equality among mankind, that respect for just laws.”
― Benjamin Rush
23 likes
Like