,
Discover new books on Goodreads
See if your friends have read any of Taffy Brodesser-Akner's books 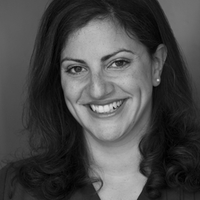 Born
in New York City, The United States
October 26, 1975
Website
http://www.taffyakner.com/
Twitter
taffyakner
edit data
Taffy Brodesser-Akner is a staff writer at the New York Times Magazine. Prior to that, her work appeared in GQ, ESPN the Magazine, Matter, Details, Texas Monthly, Outside, Self, Cosmopolitan and many other publications. Fleishman Is In Trouble is her first novel.

Quotes by Taffy Brodesser-Akner  (?)
Quotes are added by the Goodreads community and are not verified by Goodreads. (Learn more)
“Rachel and I, we’d been raised to do what we wanted to do, and we had; we’d been successful, and we’d shown everyone. We didn’t need to wear apocryphal T-shirts because we already knew the secret, which was this: that when you did succeed, when you did outearn and outpace, when you did exceed all expectations, nothing around you really shifted. You still had to tiptoe around the fragility of a man, which was okay for the women who got to shop and drink martinis all day—this was their compensation; they had done their own negotiations—but was absolutely intolerable for anyone who was out there working and getting respect and becoming the person that others had to tiptoe around. That these men could be so delicate, that they could lack any inkling of self-examination when it came time to try to figure out why their women didn’t seem to be batshit enthusiastic over another night of bolstering and patting and fellating every insecurity out of them—this was the thing we’d find intolerable.”
― Taffy Brodesser-Akner, Fleishman Is in Trouble
37 likes
Like

“It was like those T-shirts all my daughter’s friends were wearing to school now, the ones that said THE FUTURE IS FEMALE in big block letters. How they march around in broad daylight in shirts like that. But the only reason it’s tolerated is that everyone knows it’s just a lie we tell to girls to make their marginalization bearable. They know that eventually the girls will be punished for their futures, so they let them wear their dumb message shirts now.”
― Taffy Brodesser-Akner, Fleishman Is in Trouble
31 likes
Like

“A wife isn’t like an ultra-girlfriend or a permanent girlfriend. She’s an entirely new thing. She’s something you made together, with you as an ingredient. She couldn’t be the wife without you.”
― Taffy Brodesser-Akner, Fleishman Is in Trouble
24 likes
Like

Time to vote for our January 2023 Members Choice book. Poll will remain open until December 19th.

by Elizabeth de Veer
6 votes, 16.7%
Geographies of the Heart

by Robert Harris
2 votes, 5.6%
Fleishman Is in Trouble

by Taffy Brodesser-Akner
2 votes, 5.6%
Even the Dogs

by Kristy Cambron
1 vote, 2.8%
36 total votes
comments and details
Sign in to vote »

Is this you? Let us know. If not, help out and invite Taffy to Goodreads.