Discover new books on Goodreads
See if your friends have read any of R.J. Hore's books 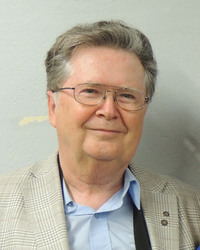 Born
Canada
Website
http://www.ronaldhore.com/
Genre
Science Fiction & Fantasy, Short Stories
Member Since
July 2012
edit data
As of August 2017 I have twelve novels in print and all are also available as ebooks. I have a few novellas that are only available as ebooks except for those six gathered into the two collections, Housetrap Chronicles, Volumes One and Two.

All are available through the publishers, eTreasures Publishing of Florida, or Champagne Books of Oregon, as well as Amazon and the usual outlets.

Currently working on a science fiction manuscript that could either be a stand alone novel or turn into a space opera trilogy. Must get into a ninth in the Housetrap series which would allow for a third collection of those stories.

I usually set it up with roses in his tee…moreThat might be a picture of me with a replica of a saber-tooth cat skull I use on my table when I attend cons.

I usually set it up with roses in his teeth. Prehistoric Yorrick is a bit of a romantic.(less)
flag
See all 12 answers from R.J. Hore…

Every once in a while an image, or single scene, bubbles into my head and won’t leave, Sometimes I have to give in and try to write out where this annoyance is going.

I had an idea for a serious short story about a disheartened and wounded knight escaping from a lost battle around a major bridge. The wide river acts as the divide between the civilized south and the frontier lands to the north. The Read more of this blog post »
2 likes · Like  •  1 comment  •  flag