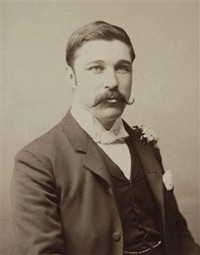 While Fergus was a very young child, in 1863 the Humes emigrated to New Zealand where James founded the first private mental hospital and Dunedin College. Young Fergus attended the Otago Boys' High School then went on to study law at Otago University. He followed up with articling in the attorney-general's office, called to the New Zealand bar in 1885.

In 1885 Hume moved to Melbourne. While h Fergusson Wright Hume (1859–1932), New Zealand lawyer and prolific author particularly renowned for his debut novel, the international best-seller The Mystery of a Hansom Cab (1886).

While Fergus was a very young child, in 1863 the Humes emigrated to New Zealand where James founded the first private mental hospital and Dunedin College. Young Fergus attended the Otago Boys' High School then went on to study law at Otago University. He followed up with articling in the attorney-general's office, called to the New Zealand bar in 1885.

In 1885 Hume moved to Melbourne. While he worked as a solicitors clerk he was bent on becoming a dramatist; but having only written a few short stories he was a virtual unknown. So as to gain the attentions of the theatre directors he asked a local bookseller what style of book he sold most. Emile Gaboriau's detective works were very popular and so Hume bought them all and studied them intently, thus turning his pen to writing his own style of crime novel and mystery.

Hume spent much time in Little Bourke Street to gather material and his first effort was The Mystery of a Hansom Cab (1886), a worthy contibution to the genre. It is full of literary references and quotations; finely crafted complex characters and their sometimes ambiguous seeming interrelationships with the other suspects, deepening the whodunit angle. It is somewhat of an exposé of the then extremes in Melbourne society, which caused some controversy for a time. Hume had it published privately after it had been downright rudely rejected by a number of publishers. "Having completed the book, I tried to get it published, but everyone to whom I offered it refused even to look at the manuscript on the grounds that no Colonial could write anything worth reading." He had sold the publishing rights for £50, but still retained the dramatic rights which he soon profited from by the long Australian and London theatre runs.

Except for short trips to France, Switzerland and Italy, in 1888 Hume settled and stayed in Essex, England where he would remain for the rest of his life. Although he was born and lived the latter part of this life in England, he thought of himself as 'a colonial' and identified as a New Zealander, having spent all of his formative years from preschool through to adulthood there. Hume died of cardiac failure at his home on 11 July 1932.

“I was not myself on that night. The wine was in and the wit was out.”
― Fergus Hume, The Silent House
tags: humorous
5 likes
Like

“I agree with Heine's remark, that if the Romans had been forced to learn it (Latin) they would not have found time to conquer the world.”
― Fergus Hume
tags: humor
3 likes
Like

“Young men, not bein' old men," she replied, cautiously, "and sinners not bein' saints, it's not nattral as latch-keys should be made for ornament instead of use, and Mr. Fitzgerald bein' one of the 'andsomest men in Melbourne, it ain't to be expected as 'e should let 'is latch-key git rusty, tho' 'avin' a good moral character, 'e uses it with moderation.”
― Fergus Hume, The Mystery of a Hansom Cab
0 likes
Like

Which Classic Mystery would you like to read in April?