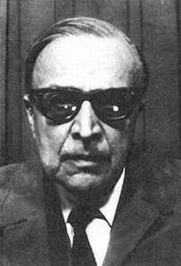 “Human life is a comedy-one must play it seriously.”
― Alexandre Kojeve
15 likes
Like

“The man who works recognizes his own product in the world that has actually been transformed by his work. He recognizes himself in it, he sees his own human reality in it he discovers and reveals to others the objective reality of his humanity of the originally abstract and purely subjective idea he has of himself”
― Alexandre Kojeve
10 likes
Like

“Indeed, we all know that the man who attentively contemplates a thing, who wants to see it as it is without changing anything, is 'absorbed,' so to speak, by this contemplation -- i.e., by this thing. He forgets himself, he thinks only about the thing being contemplates; he thinks neither about his contemplation, nor -- and even less -- about himself, his "I," his Selbst. The more he is conscious of the thing, the less he is conscious of himself. He may perhaps talk about the thing, but he will never talk about himself; in his discourse, the word 'I' will not occur.

For this word to appear, something other than purely passive contemplation, which only reveals Being, must also be present. And this other thing, according to Hegel, is Desire, Begierde....”
― Alexandre Kojeve, Introduction to the Reading of Hegel: Lectures on the Phenomenology of Spirit
8 likes
Like