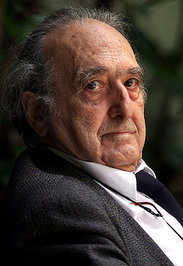 · 2,074 ratings · 200 reviews · 39 distinct works • Similar authors
More books by Rafael Sánchez Ferlosio…
Quotes by Rafael Sánchez Ferlosio  (?)
Quotes are added by the Goodreads community and are not verified by Goodreads. (Learn more)
“They had painted a lady leaning her arms on the sill of the window. This lady was waiting for a husband. Her flesh was slack and she was some forty-five years old. Perhaps she had been waiting since she was fifteen. A rose and mauve lady that had not yet gathered her flesh and her beauty into dark clothes, and still waited, like a rose stripped of its petals, with her faded colors and her artificial smile, bitter as a grimace.”
― Rafael Sánchez Ferlosio, Adventures of the Ingenious Alfanhui
tags: aging, bitterness, imagery, love
5 likes
Like

“Madrid. It was that time, the story of Don Zana 'The Marionette,' he with the hair of cream-colored string, he with the large and empty laugh like a slice of watermelon, the one of the

on the tables, on the coffins. It was when there were geraniums on the balconies, sunflower-seed stands in the Moncloa, herds of yearling sheep in the vacant lots of the Guindalera. They were dragging their heavy wool, eating the grass among the rubbish, bleating to the neighborhood. Sometimes they stole into the patios; they ate up the parsley, a little green sprig of parsley, in the summer, in the watered shade of the patios, in the cool windows of the basements at foot level. Or they stepped on the spread-out sheets, undershirts, or pink chemises clinging to the ground like the gay shadow of a handsome young girl. Then, then was the story of Don Zana 'The Marionette.'

Don Zana was a good-looking, smiling man, thin, with wide angular shoulders. His chest was a trapezoid. He wore a white shirt, a jacket of green flannel, a bow tie, light trousers, and shoes of Corinthian red on his little dancing feet. This was Don Zana 'The Marionette,' the one who used to dance on the tables and the coffins. He awoke one morning, hanging in the dusty storeroom of a theater, next to a lady of the eighteenth century, with many white ringlets and a cornucopia of a face.

Don Zana broke the flower pots with his hand and he laughed at everything. He had a disagreeable voice, like the breaking of dry reeds; he talked more than anyone, and he got drunk at the little tables in the taverns. He would throw the cards into the air when he lost, and he didn't stoop over to pick them up. Many felt his dry, wooden slap; many listened to his odious songs, and all saw him dance on the tables. He liked to argue, to go visiting in houses. He would dance in the elevators and on the landings, spill ink wells, beat on pianos with his rigid little gloved hands.

The fruitseller's daughter fell in love with him and gave him apricots and plums. Don Zana kept the pits to make her believe he loved her. The girl cried when days passed without Don Zana's going by her street. One day he took her out for a walk. The fruitseller's daughter, with her quince-lips, still bloodless, ingenuously kissed that slice-of-watermelon laugh. She returned home crying and, without saying anything to anyone, died of bitterness.

Don Zana used to walk through the outskirts of Madrid and catch small dirty fish in the Manzanares. Then he would light a fire of dry leaves and fry them. He slept in a pension where no one else stayed. Every morning he would put on his bright red shoes and have them cleaned. He would breakfast on a large cup of chocolate and he would not return until night or dawn.”
― Rafael Sánchez Ferlosio, Adventures of the Ingenious Alfanhui
tags: charming, ruffian, scoundrel
2 likes
Like

“A gypsy girl approached Don Zana and Alfanhui and held out her tambourine. Don Zana said to her, 'You don't pay for art, kid.”
― Rafael Sánchez Ferlosio, Adventures of the Ingenious Alfanhui
tags: art, cheek, donation, humor
1 likes
Like