,
Discover new books on Goodreads
See if your friends have read any of Robert Musil's books 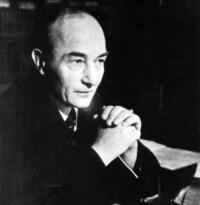 He graduated military boarding school at Eisenstadt (1892-1894) and then Hranice, in that time also known as Mährisch Weißkirchen, (1894-1897). These school experiences are reflected in his first novel, The Confusions of Young Törless.

He served in the army during The First World War. When Austria became a part of the Third Reich in 1938, Musil left for exile in Switzerland, where he died of a stroke on April 15, 1942. Musil collapsed in the middle of his gymnastic exercises and is rumoured to have died with an expression of ironic amusement on his face. He was 61 years old.

4.24 avg rating — 11,127 ratings
Quotes by Robert Musil  (?)
Quotes are added by the Goodreads community and are not verified by Goodreads. (Learn more)
“One must conform to the baseness of an age or become neurotic.”
― Robert Musil
tags: conforming, conforming-and-attitude, conformity, fitting-in, immorality, individual-vs-society, morality, neurosis, neuroticism, societal-expectations, societal-norms
116 likes
Like

“The secret of a good librarian is that he never reads anything more of the literature in his charge than the title and the table of contents. Anyone who lets himself go and starts reading a book is lost as a librarian...He's bound to lose perspective.”
― Robert Musil, The Man Without Qualities
tags: librarians, library
90 likes
Like

“His appearance gives no clue to what his profession might be, and yet he doesn't look like a man without a profession either. Consider what he's like: He always knows what to do. He knows how to gaze into a woman's eyes. He can put his mind to any question at any time. He can box. He is gifted, strong-willed, open-minded, fearless, tenacious, dashing, circumspect—why quibble, suppose we grant him all those qualities—yet he has none of them! They have made him what he is, they have set his course for him, and yet they don't belong to him. When he is angry, something in him laughs. When he is sad, he is up to something. When something moves him, he turns against it. He'll always see a good side to every bad action. What he thinks of anything will always depend on some possible context—nothing is, to him, what it is: everything is subject to change, in flux, part of a whole, of an infinite number of wholes presumably adding up to a super-whole that, however, he knows nothing about. So every answer he gives is only a partial answer, every feeling an opinion, and he never cares what something is, only 'how' it is—some extraneous seasoning that somehow goes along with it, that's what interests him.”
― Robert Musil, The Man Without Qualities
80 likes
Like