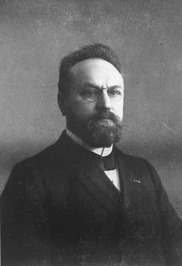 edit data
Herman Bavinck (1854-1921) succeeded Abraham Kuyper as professor of systematic theology at the Free University of Amsterdam in 1902.

4.65 avg rating — 1,195 ratings
Quotes by Herman Bavinck  (?)
Quotes are added by the Goodreads community and are not verified by Goodreads. (Learn more)
“The Gospel is temporary, but the law is eternal and is restored precisely through the Gospel. Freedom from the law consists, then, not in the fact that the Christian has nothing more to do with the law, but lies in the fact that the law demands nothing more from the Christian as a condition of salvation. The law can no longer judge and condemn him. Instead he delights in the law of God according to the inner man and yearns for it day and night.”
― Herman Bavinck
11 likes
Like

“Manifest in this trade (commercial sale of indulgences via bankers) at the same time was a pernicious tendency in the Roman Catholic system, for the trade in indulgences was not an excess or an abuse but the direct consequence of the nomistic degradation of the gospel. That the Reformation started with Luther’s protest against this traffic in indulgences proves its religious origin and evangelical character. At issue here was nothing less than the essential character of the gospel, the core of Christianity, the nature of true piety. And Luther was the man who, guided by experience in the life of his own soul, again made people understand the original and true meaning of the gospel of Christ. Like the “righteousness of God,” so the term “penitence” had been for him one of the most bitter words of Holy Scripture. But when from Romans 1:17 he learned to know a “righteousness by faith,” he also learned “the true manner of penitence.” He then understood that the repentance demanded in Matthew 4:17 had nothing to do with the works of satisfaction required in the Roman institution of confession, but consisted in “a change of mind in true interior contrition” and with all its benefits was itself a fruit of grace. In the first seven of his ninety-five theses and further in his sermon on “Indulgences and Grace” (February 1518), the sermon on “Penitence” (March 1518), and the sermon on the “Sacrament of Penance” (1519), he set forth this meaning of repentance or conversion and developed the glorious thought that the most important part of penitence consists not in private confession (which cannot be found in Scripture) nor in satisfaction (for God forgives sins freely) but in true sorrow over sin, in a solemn resolve to bear the cross of Christ, in a new life, and in the word of absolution, that is, the word of the grace of God in Christ. The penitent arrives at forgiveness of sins, not by making amends (satisfaction) and priestly absolution, but by trusting the word of God, by believing in God’s grace. It is not the sacrament but faith that justifies. In that way Luther came to again put sin and grace in the center of the Christian doctrine of salvation. The forgiveness of sins, that is, justification, does not depend on repentance, which always remains incomplete, but rests in God’s promise and becomes ours by faith alone.”
― Herman Bavinck
tags: catholicism, faith, indulgences, justification, martin-luther, reformation, sin
7 likes
Like

“The resurrection is the fundamental restoration of all culture.”
― Herman Bavinck, The Philosophy of Revelation
6 likes
Like


Is this you? Let us know. If not, help out and invite Herman to Goodreads.