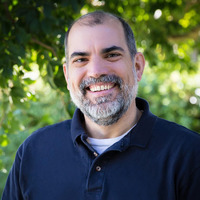 The Spirituality of Minimalism - Part One

Stuff. Toys. Things. Clutter. Junk. It doesn’t matter what you call it, we live in a generation that is starting to realize we simply have too much.

​At the end of World War II, our nation experienced tremendous economic growth. Households no longer got by with just one car. Suddenly ‘having more’ became the trend. Why have only one car when two is so much better? Or only one television when two ma Read more of this blog post »
Like  •  0 comments  •  flag

Michael Chrobak is currently reading
What your Dog Knows : Tap into your Dog's Intelligence through the World of Canine Cognition
by Sophie Collins
bookshelves: currently-reading

“The deeper the feelings of unworthiness dug into his heart, the darker the room became. It spread from the outside in, growing darker and more
ominous with each new thought. He feared it would swallow him whole.”
― Michael Chrobak, Foundations of Faith
tags: challenge, darkness, faith, fear, god
0 likes
Like

“As he walked, he felt the darkness behind him, following him. He swore he heard it whisper, “Run!”
― Michael Chrobak, Foundations of Faith
tags: belief, challenge, darkness, faith, fear, god
0 likes
Like

“I just want to be someone, to mean something to anyone…”
― Charlotte Eriksson
tags: charlotte-eriksson, confused, empty-roads-broken-bottles, finding-yourself, lost, lyrics, motivation, music, not-enough, pressure, the-glass-child, the-great-perhaps, youth
225 likes
Like

“Scientists are slowly waking up to an inconvenient truth - the universe looks suspiciously like a fix. The issue concerns the very laws of nature themselves. For 40 years, physicists and cosmologists have been quietly collecting examples of all too convenient "coincidences" and special features in the underlying laws of the universe that seem to be necessary in order for life, and hence conscious beings, to exist. Change any one of them and the consequences would be lethal. Fred Hoyle, the distinguished cosmologist, once said it was as if "a super-intellect has monkeyed with physics".

To see the problem, imagine playing God with the cosmos. Before you is a designer machine that lets you tinker with the basics of physics. Twiddle this knob and you make all electrons a bit lighter, twiddle that one and you make gravity a bit stronger, and so on. It happens that you need to set thirtysomething knobs to fully describe the world about us. The crucial point is that some of those metaphorical knobs must be tuned very precisely, or the universe would be sterile.

Example: neutrons are just a tad heavier than protons. If it were the other way around, atoms couldn't exist, because all the protons in the universe would have decayed into neutrons shortly after the big bang. No protons, then no atomic nucleuses and no atoms. No atoms, no chemistry, no life. Like Baby Bear's porridge in the story of Goldilocks, the universe seems to be just right for life.”
― Paul Davies

“Sometimes you need to sit lonely on the floor in a quiet room in order to hear your own voice and not let it drown in the noise of others.”
― Charlotte Eriksson, You're Doing Just Fine
tags: alone, being, charlotte-eriksson, city, crowd, floor, inspiration, lonely, mastery, meditation
255 likes
Like

“Maybe freedom really is nothing left to lose. You had it once in childhood, when it was okay to climb a tree, to paint a crazy picture and wipe out on your bike, to get hurt. The spirit of risk gradually takes its leave. It follows the wild cries of joy and pain down the wind, through the hedgerow, growing ever fainter. What was that sound? A dog barking far off? That was our life calling to us, the one that was vigorous and undefended and curious.”
― Peter Heller, Hell or High Water: Surviving Tibet's Tsangpo River
tags: kayak, outdoors, risk, wilderness
68 likes
Like

“Go outside. Don’t tell anyone and don’t bring your phone. Start walking and keep walking until you no longer know the road like the palm of your hand, because we walk the same roads day in and day out, to the bus and back home and we cease to see. We walk in our sleep and teach our muscles to work without thinking and I dare you to walk where you have not yet walked and I dare you to notice. Don’t try to get anything out of it, because you won’t. Don’t try to make use of it, because you can’t. And that’s the point. Just walk, see, sit down if you like. And be. Just be, whatever you are with whatever you have, and realise that that is enough to be happy.
There’s a whole world out there, right outside your window. You’d be a fool to miss it.”
― Charlotte Eriksson, You're Doing Just Fine
tags: adventure, charlotte-eriksson, happy, journey, nature, open-road, outside, road-trip, roads, stillness
375 likes
Like

Mira Kirshenbaum
author of
Too Good ...