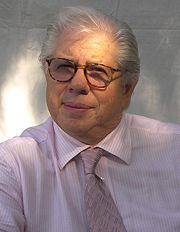 Born
in Washington, District of Colombia, The United States
February 14, 1944
Website
http://www.carlbernstein.com/home.php
Genre
Nonfiction
edit data
Carl Bernstein is an American journalist who, as a reporter for The Washington Post along with Bob Woodward, broke the story of the Watergate break-in and consequently helped bring about the resignation of United States President Richard Nixon. For his role in breaking the scandal, Bernstein received many awards; his work helped earn the Post a Pulitzer Prize for Public Service in 1973.

“We are in the process of creating what deserves to be called the idiot culture. Not an idiot sub-culture, which every society has bubbling beneath the surface and which can provide harmless fun; but the culture itself. For the first time, the weird and the stupid and the coarse are becoming our cultural norm, even our cultural ideal.”
― Carl Bernstein
tags: culture, humanity, idiocy, life
45 likes
Like

“To those who will decide if he should be tried for 'high crimes and misdemeanors' -the House of Representatives-
And to those who would sit in judgment at such a trial if the House impeaches -the Senate-
And to the man who would preside at such an impeachment trial -the Chief Justice of the United States, Warren Burger-
And to the nation...
The President said, 'I want you to know that I have no intention whatever of ever walking away from the job that the American people elected me to do for the people of the United States.'

“The August 1 story had carried their joint byline; the day afterward, Woodward asked Sussman if Bernstein's name could appear with his on the follow-up story - though Bernstein was still in Miami and had not worked on it. From the on, any Watergate story would carry both names. Their colleagues melded the two into one and gleefully named their byline Woodstein.

Which True Crime book would you like to read in April?

Is this you? Let us know. If not, help out and invite Carl to Goodreads.