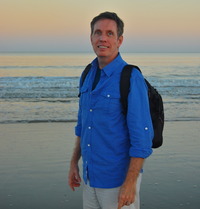 “If there is nothing new under the sun, at least the sun itself is always new, always re-creating itself out of its own inexhaustible fire.”
― Michael Sims, Apollo's Fire: A Day on Earth in Nature and Imagination
tags: hope, rebirth, renewal, sun
33 likes
Like

“It was a dramatically patterned robin-sized songbird with a black hood, white waistcoat, and rich russet sides—a bird whose cheerful call of drink-your-teeeaaaaa was far more melodious than the sharp two-syllable exclamation towhee, or the sound that had provided its other name, chewink.”
― Michael Sims, The Adventures of Henry Thoreau: A Young Man's Unlikely Path to Walden Pond
2 likes
Like

“Henry yearned to instill in the students a delight in knowledge as much as he wanted to drill them in a particular subject. Vividly he explained one of his favorite themes, the seasons—their source in the tilt and rotation of the Earth and its revolution around the sun, their relationship to the changing lives of animals and people throughout the year, their parade of strikingly different forms of beauty. Such talks made learning seem central to the enjoyment of life rather than some kind of adornment—and, Henry hoped, it set a tone for the school day. Henry”
― Michael Sims, The Adventures of Henry Thoreau: A Young Man's Unlikely Path to Walden Pond
2 likes
Like

Is this you? Let us know. If not, help out and invite Michael to Goodreads.