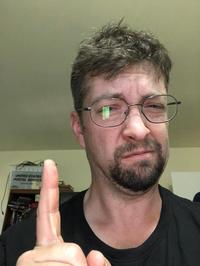 Born
in Seattle, The United States
Website
https://sites.google.com/site/beyondthelosthori...
Twitter
Awesomeincarn8
Genre
Fantasy, Science Fiction, Horror
Member Since
September 2011
edit data
I'm Eric Allen. I was born in Seattle, WA, and spent most of my life in Utah, being allergic to just about everything around me. Ah, the memories... *sneeze* I now work as a mailman, a job I greatly enjoy, as I get to spend a lot of time outside, unsupervised, and very rarely ever actually have to talk to anyone, three things that I value highly in a job. Plus it gives me plenty of time almost every day to listen to audiobooks with no one to bother me.

I have several various past jobs in the publishing industry, including newspaper editor, magazine columnist, professional book critic, and occasional*** asshole. I also spent a brief time working as an English teacher, but it didn't take me long to realize that I hate children, and have no pa I'm Eric Allen. I was born in Seattle, WA, and spent most of my life in Utah, being allergic to just about everything around me. Ah, the memories... *sneeze* I now work as a mailman, a job I greatly enjoy, as I get to spend a lot of time outside, unsupervised, and very rarely ever actually have to talk to anyone, three things that I value highly in a job. Plus it gives me plenty of time almost every day to listen to audiobooks with no one to bother me.

I have several various past jobs in the publishing industry, including newspaper editor, magazine columnist, professional book critic, and occasional*** asshole. I also spent a brief time working as an English teacher, but it didn't take me long to realize that I hate children, and have no patience. Both things somewhat inhibit your ability to teach children how to use the English language properly in a day and age where texting without thought for spelling and grammar has always been a huge part of their lives.

Currently, I spend a lot of my free time writing (terrible) books, mostly for my own amusement, without much in the way of ambition toward professional writing and publishing. You can read several of my (terrible) attempts at writing for free on my website: https://sites.google.com/site/beyondt..., and laugh with me at how inept they are. I'm quite proud of my current project "Memories of What Never Was" even though I've only just finished a rough draft of it, and it has a crazy amount of editing and revision work needed before it's fit for human consumption.

And I still do write the occasional book review every now and then, though I don't usually use my old, professional template for them anymore, mostly just randomly babbling about what I liked and didn't like these days.

I accept all friend requests, and welcome all civil and respectful argument over any agreement, or disagreement of my opinions shared upon this website. Feel free to comment on any of my reviews, or PM me with any questions.

***people who know me would say nearly always, rather than occasional. ...more

Two things that have absolutely nothing to do with each other, I'm sure.

So, for the last ten years or so, my baby brother (who is now 30) has been living with me.  Basically freeloading off of me.  He chipped in for rent, but his portion was pretty much just a token pittance.  Pretty much his only expense was feeding himself.  I allowed this, because he had nowhere else to go.  My parents are very pissed off at him.  Even still, after ten years.  He had his life made

“I needed to say something. Something romantic! Something to sweep her off her feet.
"You’re like a potato!" I shouted after her. "In a minefield."
She froze in place. Then she spun on me, her face lit by a half-grown fruit. “A potato,” she said flatly. “That’s the best you can do? Seriously?”
“It makes sense,” I said. “Listen. You’re strolling through a minefield, worried about getting blown up. And then you step on something, and you think, ‘I’m dead.’ But it’s just a potato. And you’re so relieved to find something so wonderful when you expected something so awful. That’s what you are. To me.”
“A potato.”
“Sure. French fries? Mashed potatoes? Who doesn’t like potatoes?”
“Plenty of people. Why can’t I be something sweet, like a cake?”
“Because cake wouldn’t grow in a minefield. Obviously.”
She stared down the hallway at me for a few moments, then sat on an overgrown set of roots.
Sparks. She seemed to be crying. Idiot! I thought at myself, scrambling through the foliage. Romantic. You were supposed to be romantic, you slontze! Potatoes weren’t romantic. I should have gone with a carrot.”
― Brandon Sanderson, Firefight

“As she’d left, I’d glanced at her gun.
This time, when she’d pointed it at me, she’d flicked the safety on. If that wasn’t true love, I don’t know what was.”
― Brandon Sanderson, Firefight
tags: flicked, glanced, gun, love, safety, time, true
137 likes

Welp, due to increased work load and responsibilities at my day job, combined with some complications with my private life, I have come to the decision that I just can't do the whole critic side job thing anymore. I keep missing deadlines left and right and I just can't keep up with what I used to be able to do with the job. It's time for someone with a fresh perspective, more free time, and a willingness to work for nearly nothing (I seriously worked for free books and gas money) to step into the extraordinarily small space that I now vacate, which is likely unnoticeable by the vast and overwhelming majority of humankind. I've been doing the job for years, and I will miss the free books, and the occasional appreciative comment from someone whom I made laugh, but I will certainly not miss the sheer volume of internet trolls who think it their civic duty to tear me to shreds over our differences of opinion. I do have fun writing reviews, and will continue to do so for fun on books that leave either a strong good impression or a strong bad one, but I won't be posting reviews as regularly as I used to on this site. (Not that I have been lately anyway.)

So, thanks for all the support Goodreads friends and followers, but, it's time to put the majority of my time into other persuits... until I read that next book that I absolutely have to talk about at great length.

Thanks for being friends on Goodreads.

Getting a lot of requests from people for books to review lately. Here's a few rules to follow if you have a book you want me to review.

1.) The book must be published by an actual publishing company. And no, Amazon does not count. I know a lot of people out there want real feedback on their own self-published book, or on a book they're trying to sell to agents and publishers, but I write reviews for a paycheck and the simple truth is, that I won't get a paycheck for reviewing any book that hasn't been officially published by an actual publishing house. My advice to you would be to find a writing group, either on the internet or locally. These groups can be a great resource to someone trying to improve their writing and get feedback on their material.

2.) The book must be available in audio format from Audible.com. I work two jobs in addition to trying to get my own writing career off the ground. most of my "reading" these days comes from listening to auidobooks while at my day job, because I just don't have the time to sit down and read books anymore.

3.) The book has to be something that I would actually read. I read science fiction, fantasy, horror, dystopian, and supernatural. If the book doesn't readily fit into one of those categories, I'm probably not going to enjoy it and will likely end up quitting before finishing. I know everyone wants to see me flip out and start screaming obscenities at Twilight, but the simple fact of the matter is, that if I knew nothing about Twilight, and saw it on the shelf, I would never pick it up. I don't care about teenaged romance or sparkly, metrosexual "vampires". Sorry.

4.) Don't complain if my opinion doesn't quite match yours. You're asking me what I think of a book, not what I think you want to hear about the book. I'm not going to lie and tell you I enjoyed something that I didn't just to make you feel all warm and fuzzy.

Thanks for adding me Eric!

I'm glad to see that you want to help improve the book blogging community!

I am looking forward to us working together!

Jocelyn wrote: "That's your first draft? Oh, sorry. I thought it was just a rough draft in general, a draft that had gone through some revising but was not yet complete.

I have a very good memory, and when it comes to my stories, I am constantly reviewing and revising them in my head all day, every day. I've always been able to pick up exactly where I left off with pretty much everything. It's just how my memory works I guess. Keeping everything straight in my head has never been a problem for me.

Well, as for The Eternal Chain, that's the beauty of neing able to do multiple drafts, that is what first drafts are for, for putting everything you possibly can in, and making all of your mistakes. Once i get around to finishing that draft, and refining it in further drafts, the prose will be tightened an streamlined so that extraneous descriptive elements are removed, and the writing flows morenaturally. For me, the first draft is only about getting the story on the page. Editing, filling in the holes, consistency, and continuity can come later.

Oh, I meant to tell you. You know how you made that joke about Kvothe in the second book? the one where he should have his hair flowing and his shirt ripped? You do know that was the cover for the first book, right?

Or is it you that is stuck with me... BWAAHAAHAA!!!

Now you're stuck with me! You know unless you just de-friend me. But thanks for accepting the invite.

Hi Eric, thanks for accepting my friend request :)