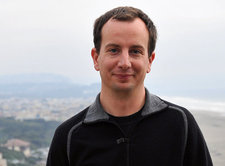 This will prevent James from sending you messages, friend request or from viewing your profile. They will not be notified. Comments on discussion boards from them will be hidden by default.
Sign in to Goodreads to learn more about James.

“Why did you start to write?


I left at 15.. I started to write becase I was taken off a ship from Germany when I was 18. They said I wouldn't live for 6 months.

I'd been given up for dead many times and I just didn't want to waste my life. I had what I now realize was a spiritual experience.

number one, I would regret my entire life.
and number two, I would want to live my life over again.
and then I would die.
and that terrified me.

to think that I would live my entire life, look at it, and say oh..I blew it. was such a terrifying thought
that I bought a typewriter

I didn't know what I was going to do with it, but I bought a typewriter.
but that is what got me to start writing, was

I did not want to waste my life

I wanted to, and I HAD to, do something with my life”
― Hubert Selby Jr.

Polls voted on by James