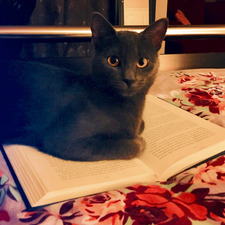 This will prevent Hale from sending you messages, friend request or from viewing your profile. They will not be notified. Comments on discussion boards from them will be hidden by default.
Sign in to Goodreads to learn more about Hale.

The Humans by Matt Haig
115 highlights
This particular type of road was a motorway. A motorway is the most advanced type of road there is, which

“I love you. There is no limit to what I can give to you, no time I need. Even when this world is forgotten whisper of dust between the stars, I will love you.”
― Sarah J. Maas, Empire of Storms
tags: aelin, celaena-sardothien, empire-of-storms, rowaelin, rowan, rowan-whitethorn, throne-of-glass
308 likes

“Lorcan reached out, grasping her chin and forcing her to look at him. Hopeless, bleak eyes met his. He brushed away a stray tear with his thumb. “I made a promise to protect you. I will not break it, Elide.”

“I will always find you,” he swore to her.

“The useless sentries in the watchtower are now all half in love with you,” he lied. “One said he wanted to marry you.”

A low snarl. He yielded a foot but held eye contact with her as he grinned. “But you know what I told them? I said that they didn't stand a chance in hell. Because I am going to marry you,” he promised her. “One day. I am going to marry you. I'll be generous and let you pick when, even if it's ten years from now. Or twenty. But one day, you are going to be my wife.”

Polls voted on by Hale