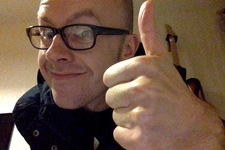 This will prevent Steve from sending you messages, friend request or from viewing your profile. They will not be notified. Comments on discussion boards from them will be hidden by default.
Sign in to Goodreads to learn more about Steve.

“Not for the first time Marianne thinks cruelty does not only hurt the victim, but the perpetrator also, and maybe more deeply and more permanently. You learn nothing very profound about yourself simply by being bullied; but by bullying someone else you learn something you can never forget.”
― Sally Rooney, Normal People
36 likes

“American planes full of holes and wounded men and corpses took off backwards from an airfield in England. Over France a few German fighter planes flew at them backwards sucked bullets and shell fragments from some of the planes and crewmen. They did the same for wrecked American bombers on the ground and those planes flew up backwards to join the formation.

The formation flew backwards over a German city that was in flames. The bombers opened their bomb bay doors exerted a miraculous magnetism which shrunk the fires gathered them into cylindrical steel containers and lifted the containers into the bellies of the planes. The containers were stored neatly in racks. The Germans below had miraculous devices of their own which were long steel tubes. They used them to suck more fragments from the crewmen and planes. But there were still a few wounded Americans though and some of the bombers were in bad repair. Over France though German fighters came up again made everything and everybody as good as new.

When the bombers got back to their base the steel cylinders were taken from the racks and shipped back to the United States of America where factories were operating night and day dismantling the cylinders separating the dangerous contents into minerals. Touchingly it was mainly women who did this work. The minerals were then shipped to specialists in remote areas. It was their business to put them into the ground to hide them cleverly so they would never hurt anybody ever again.”
― Kurt Vonnegut, Slaughterhouse-Five

“Cats are not adoring like dogs. They don’t care. They can never be relied upon to shore up a human ego. They go their way, do their thing, are not subservient and will never apologise. No one has ever come across a cat apologising and if a cat did, it would patently be obvious it was not being sincere.”
― Anna Burns, Milkman
47 likes

“The filming was interrupted at one point by an old man walking his dog, looking for driftwood. Mallet asked him if he wouldn’t mind moving, and pointed out Bowie sitting outside the catering van. ‘Do you know who this is?’ he asked. Sharp as a tack, the old man responded with, ‘Of course I do. It’s some cunt in a clown suit.’ Sometime later, Bowie remembered, ‘That was a huge moment for me. It put me back in my place and made me realise, “Yes, I’m just a cunt in a clown suit.”
― Dylan Jones, David Bowie: A Life
1 likes

So Many Damn Books — 201 members — last activity Oct 24, 2017 01:25PM
a goodreads group, based on a podcast, based on a friendship, based on books. abandon all hope of finishing your tbr pile, all ye who enter.

James Kelman
author of: How Late it Was, How Late

The ACTUAL 100 Best Novels of the 20th Century

Polls voted on by Steve