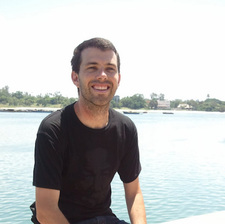 This will prevent Alan from sending you messages, friend request or from viewing your profile. They will not be notified. Comments on discussion boards from them will be hidden by default.
Sign in to Goodreads to learn more about Alan.

“And as if blowing it up, flooding it, and keeping it behind the klyon wasn't enough, State Security special forces patrolled the area until 1989. Some locals say there was an additional 'live fence' of thousands of vipers specially bred for this purpose by Uzbeks along the southern Black Sea, under something called decree number 56. Why Uzbeks? Why vipers? Did decree 56 read: 'Let us fulfil the five-year snake plan in one year'?”
― Kapka Kassabova, Border: A Journey to the Edge of Europe
tags: black-sea, bulgaria, conspiracy-theory, funny, uzbekistan
0 likes

“Marmaduke's theory was that, as he couldn't understand Christianity, it was safe to premise that people whose religion was a mixture of degraded Buddhism and devilworship couldn't understand it either. So he founded a Buddhist mission, to teach 'em their own religion.”
― Talbot Mundy, Om, the Secret of Ahbor Valley
tags: buddhism, christianity, india
0 likes

“Life is a journey, not a destination.”
― Ralph Waldo Emerson
tags: live-in-the-moment
1853 likes

“It's enough for me to be sure that you and I exist at this moment.”
― Gabriel García Márquez, One Hundred Years of Solitude
tags: existence, truth
4639 likes

Polls voted on by Alan