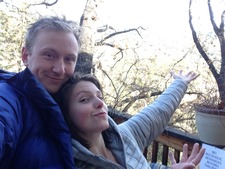 This will prevent Sam from sending you messages, friend request or from viewing your profile. They will not be notified. Comments on discussion boards from them will be hidden by default.
Sign in to Goodreads to learn more about Sam.

“Nothing is so inhibiting as needing to write something brilliant. Once a good friend of mine was writing an opera and really experiencing a block. He was duly tormented, believing that "composing is a painful process." He talked wistfully about a certain opera as being considered "the greatest opera since World War Two." I told him, "It sounds to me like you are trying to write the greatest opera since Desert Storm! I have an idea. Why don’t you just write a bad opera? That should be easy." My friend laughed uncomfortably with me, but I could sympathize with his dilemma. You always want to do well, but the recurring paradox is that you have a much better chance of doing well if you let go of the anxiety and just get on with it.”
― Kenny Werner, Effortless Mastery
0 likes

“As I was heeding gravity’s pull down the hill, I also heard music coming from upstairs. Three instruments, a violin, a flute, and a cello, were playing in a second-floor apartment. They were murdering a piece by Bach, I think. The murder was not in question, I just wasn’t sure if it was Bach or Haydn or someone else being killed upstairs. I stopped dead in my tracks to listen to them. They played with such a confident erring. On they stumbled and they never stopped to correct themselves. They pushed forward through their mistakes to the end. I applauded. I had to. I’m not sure they noticed me, but what luck for me to witness their attempt that morning. I looked out at the bay. What fine luck. Moments like the soloist practicing scales in Portland and the trio murdering Bach in Iceland give me such energy and such hope. These musicians were playing loud for all to hear and tough luck to the world if it was not perfect and the world judged them harshly. There is only one way to the proficiency of the master, and the budding violinist knew it as did the trio. Practice. Keep practicing until the notes have the precision they require. Keep practicing until the work is transformed, until the work transforms you, until study becomes Mastery.”
― Gary Rogowski, Handmade: Creative Focus in the Age of Distraction
0 likes

Jocko Podcast Book Club — 302 members — last activity Jan 24, 2018 07:21AM
This is a group to discuss the books mentioned in the Jocko Podcast, as well as the podcast itself.

Polls voted on by Sam