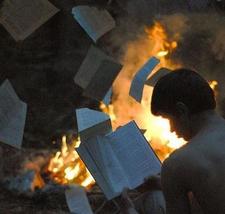 See all 5 books that Joshua Nomen-Mutatio is reading…

“As if the parents we were born to weren't always a matter of happenstance: an elbow jostled at a bar, a muscular hand smoothing the hair away from a blue-shadowed eye, a quick decision that this girl looks hot or that guy seems safe. We are never guaranteed that the people who fit together so deliciously in the heat of a moment can building a lasting love. And it is love, the breadth and force of being wholly, unabashedly loved — not just having two parents who look like the wax figures on a wedding cake — that affirms and redeems us. Poverty alone doesn't always spark violence. And a two-parent home isn't always the antidote. The urge to obliterate is as dark and unknowable as the hollows of our bones.”
― Laura Bogart
1 likes

“The tragedy of a species becoming unfit for life by over-evolving one ability is not confined to humankind. Thus it is thought, for instance, that certain deer in paleontological times succumbed as they acquired overly-heavy horns. The mutations must be considered blind, they work, are thrown forth, without any contact of interest with their environment. In depressive states, the mind may be seen in the image of such an antler, in all its fantastic splendour pinning its bearer to the ground.”
― Peter Wessel Zapffe, Essays
53 likes

“Sometimes I worry, for myself, that I’ve stopped being amazed at certain things, or I’ve taken for granted a set of ideas about how the world works, what people are doing with each other or alone, all the fundamental relationships in the world. I worry that I start taking it for granted and stop feeling the intensity of it because of language. Language starts to shut down the strength and power and strangeness of what it means to be a person in the world.”
― Ben Marcus
tags: 2014, interview, leaving-the-sea, the-rumpus
3 likes

“I have in my head things I may not have exactly seen, just as you who read this have me.”
― Joseph McElroy, Lookout Cartridge
11 likes

“I knew I was in the vicinity of a serious lesson, if not about how to live life, then at least how to put some poetry into your craven retreat from it.”
― Sam Lipsyte, Home Land
7 likes

Sam Harris
author of: Letter to a Christian Nation

Lucretius
author of: The Way Things are

Patricia S. Churchland
author of: Neurophilosophy: Toward a Unified Science of the Mind/Brain

V.S. Ramachandran
author of: Phantoms in the Brain: Probing the Mysteries of the Human Mind
More…

Polls voted on by Joshua Nomen-Mutatio