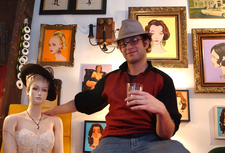 This will prevent Sam from sending you messages, friend request or from viewing your profile. They will not be notified. Comments on discussion boards from them will be hidden by default.
Sign in to Goodreads to learn more about Sam.

“The truth of authenticity is different from the truth of honesty. To be authentic is to live as one wishes others to live; to be honest is to admit that this is impossible.”
― Tony Judt, Thinking the Twentieth Century
0 likes

“But each time I tried, something odd happened. At some point in the writing process I got stuck; I could not get the ideas to come together or the argument to take form—or rather, the argument kept changing. When writing in this divested way, in the realm of pure and unmediated ideas, anything is possible, and the possibilities overwhelmed me. I became too conscious of the words themselves and the fact that I could manipulate them endlessly, the way numbers can be manipulated apart from any concrete referent.”
― Meghan O'Gieblyn, God, Human, Animal, Machine: Technology, Metaphor, and the Search for Meaning
1 likes

“In 1939, the British crystallographer J. D. Bernal published a remarkable book, The Social Function of Science. The book’s thorough accounting of scientific institutions, research salaries, career trajectories, educational systems, and national priorities makes it a landmark publication in the sociology of science, but Bernal’s careful research wasn’t what sparked a public controversy and political backlash. Bernal, a Marxist and a member of the Communist Party of Great Britain, premised his book on the idea that the scientific process was intimately tied to social and economic conditions. Bernal acknowledged the concept of “science as a pursuit of pure knowledge for its own sake,” but he described the attitude as only one end of a spectrum bounded at the other by “science as power.” He relentlessly pointed out how capitalism shaped the production of knowledge in the United States and repeatedly referred to scientists as “scientific workers.” The book was, in many ways, a brief on behalf of Soviet-style planning as the surest and swiftest path to transform society and improve the human condition.1”
― Audra J Wolfe, Freedom's Laboratory: The Cold War Struggle for the Soul of Science
0 likes

Polls voted on by Sam