This has potential. Fingers crossed for a completion.


Snow Crash movie to be written and directed by Joe Cornish
http://www.geek.com/articles/geek-cet...

OK, What is Cyberpunk? When I hear that I think the Ramones or the Sex Pistols in space.

Sounds like Disney gave it a solid look, so it is likely to be a reasonably good movie.

Now of course which movies have really captured the books. I've never read Lord of the Rings, but fans seemed to like them, but on the other hand look at how long they are. Did one of them originally have an intermission?

So, I always take books that get turned into movies with a grain of salt. Even if you are a fast reader and can read a book of 400 pages in one day, how can we really expect film makers to get one day's worth of reading into a 2 hour time frame?

If you have to ask, you weren't there.

Think of it being the Internet version of steam punk. Dated, but still kind of cool.

OK, what is Steam Punk? Now I'm think of the Sex Pistols on a Steam Locomotive.

Walrus wrote: "OK, what is Steam Punk? Now I'm think of the Sex Pistols on a Steam Locomotive."

Walrus wrote: "Sounds like Disney gave it a solid look, so it is likely to be a reasonably good movie."

I haven't read the article yet, but this is really weird. Have you ever read
Down and Out in the Magic Kingdom by Cory Doctorow? It takes place in the far future and there's a group of people who devote their lives to maintaining Disneyworld. At one point, there's a parade. (If you've ever been to a Disney theme park, you know what the parades are like. ) One of the characters in the parade is Hiro Protagonist.

It's just a case of the predictive nature of science fiction.

terpkristin wrote: "...whenever I think of "steampunk," I think of rebels in a pre-/early-industrial area making technology from "primitive" parts.."

Yes, but reading some of the cyperpunk form the 80's, "feels" like reading about pre-/early-industrial technology :)

Oh, I could see that. Its seemed like being in school then, that history teachers were fascinated with that time period, maybe it was a national thing.

What do I know, I was just a kid bored in class.

Cyberpunk was used to describe the Novels of William Gibson and others. http://en.wikipedia.org/wiki/Cyberpunk

Wikipedia has its limits (although its treatment of Gaming Consoles starting with the Atari 2600 is very good ((pong might be good but I didn't look)) ), so that explains my next question.

Attack the Block was a cracking good film, so I have every confidence in Joe Cornish to do a good job (& there were lots of nice little scifi nods, like naming all the buildings etc after classic scifi authors) :)

Brave New World has to be Cyberpunk on some level. Like the Matrix, it is based in existing technology of the time, and looks ahead to when the technology could be used to alter our world in odd ways.

Huxley must have known about emerging genetic research and Soma (Which is prescribed today as a relaxant) must have been developed about the time of the book.

Huxley's characters had free sex, of course his women had the right to say no, but sex was so free - no one got pregnant and in Huxley's day there were less sexually transmitted disease - that it was almost phopaux (sp?) for a woman to say no for too long. One guy had to wait a whole 2 weeks for a particular gal to say yes.

So everyone was born of test tube and genetically manufactured to be a genius, smart, or dumb. And they were assigned jobs based on that breeding. Gone is freedom of choice, but there is a guy who wants more.

Brave New World seems to be written as a warning of what could happen. 1984 is the same sort of thing, but I have never read 1984. Our high school Senior Year English department gave us a choice between the two.

I have been gifted with amazing long term memory on many things, but my short term memory needs lots of work, yet still it was the re-read I gave Brave New World after finishing college that I'm pulling these things from.

Walrus wrote: "Brave New World has to be Cyberpunk on some level. Like the Matrix, it is based in existing technology of the time, and looks ahead to when the technology could be used to alter our world in odd w..."

The Matrix wasn't based upon anything remotely like existing technology of the time or even now. Nor is BNW cyberpunk, what with the complete lack of anything cyber.

Walrus wrote: "OK, what is Steam Punk? Now I'm think of the Sex Pistols on a Steam Locomotive."

It's what happens when white folks adore the Victorian era and want to write science fiction set in it while ignoring the fact that all the things they like about the time were only made possible through massive oppression of people of color, and the sort of super-Victoriana they dream of would require even more oppression to work.

Sean, I respect your opinion, feel free to try to change mine.

I enjoyed the Matrix, but it was in my opinion simply a redo of the Terminator. Computers had taken over mankind and turned mankind into batteries. Scientific concepts of how Computer Technology and Battery Technology were extrapolated to show how life could be changed in the future. It wasn't Post Apocalyptic, but the computers run everything in The Matrix in order to prevent Apocalypse, that was how the computer dudes justified their actions.

I don't think this could really ever happen, but Sci-Fi writers give us pause, so technology experts will have some sort of ideas of what to avoid in the future.

Sean I also like the idea of Victorian era Sci-Fi, it shows what may have been possible at the time.

I'm kinda interested in a Micheal Angelo Steam Punk, he had ideas for achieving flight.

And so what about Tesla, he had ideas on using Electricity (high technology for the time) to control the weather.

Can this thread get moved to the "TV, Movies, & Video Games" thread? 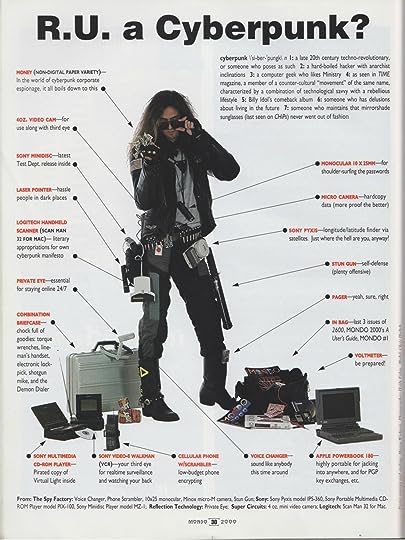 Seems I fit the cyberpunk mold more than anything else. Definitely not a steampunker, though I do like the ornate doodads.

I think I still have that scanner somewhere :O

You don't need a portable scanner anymore. You only need a smart phone with a high-res. camera to send your pictures. That's what I do. I take pictures of articles, etc., I find on the go and send it to myself or interested parties. I video tape everything with my iPhone, too. I have digital diaries that I can include everything I document that day. Neat stuff.

William Gibson is credited as the inventor of Cyberpunk but it was only a rough concept then. Next time you are in a bookstore, read the first page of Snow Crash. For me, Stephenson's language there pretty much defines the genre.

AndrewP wrote: "William Gibson is credited as the inventor of Cyberpunk but it was only a rough concept then. Next time you are in a bookstore, read the first page of Snow Crash. For me, Stephenson's language there pretty much defines the genre. "
Absolutely. Although Neuromancer has my favorite first line of all time - "The sky above the port was the color of television, tuned to a dead channel."

Man, I just hope that the mafia pizza delivery from Snow Crash makes it into the movie version. And the anti-rape device. The Sumerian stuff and Second Life can get tossed.

the sumerian stuff is a vital plot point of course they can tone it down. the SL stuff too as part of the story happens online as is one of the final battles.

Cyberpunk is a subgenre of science fiction, prominent in the 1980s, that explored a lot of the technological and cultural concerns of the time, generally in a near-future setting where noirish investigators, hackers, couriers, and other people straddling the line between the haves and have-nots and possibly sporting biomechanical/cybernetic implants, work for the system until they end up working against it.

Snow Crash is often cited as one of the first "self-aware" cyberpunk novels--it uses a lot of the tropes common the genre, but there's a sense it's winking at the audience half the time.

Post-cyberpunk sprang up in the 90s, and tones down the "multinational corporations = bad; rebel hackers who want information to be free = good" dichotomy a fair bit, as well as the common near future setting of a dystopia of filthy urban sprawl and environmental devastation where the US economy is in tatters and Japanese corporations rule the world. Coming 10-15 years after the birth of cyberpunk, it also adjusts most of the technology that its predecessor guessed wrong.

Almost any other genre or subgenre of fiction that has a "-punk" label, it's pretty much guaranteed to just be an aesthetic. Works with the label will probably share some superficial similarities of setting, plots, and character archetypes, but there's no guiding philosophy or ethos behind it.

I was curious, so I googled.