Books that I own and will try to read in January. This list is subject to change.

I LOVE LOVE LOVE the Undead (Queen Betsy) books...they just keep cracking me up! I hope you enjoy it too!

Thanks, Deanna. I requested it from my library but it's really popular and I've been waiting for over 3 months so I decided to just buy it.

I have a Nook and have most all of the Queen Betsy books on it....you can also do Nook or Kindle on your computer and download them pretty cheap...I think all of them are probably no more than $4 to $9 for each...it varies with each book. They are easy reads and very entertaining. Not high literature of course but I thoroughly enjoy them.

I have a Sony and most of them cost $8 but since I can borrow eBooks from my library I can borrow them for free :). Thanks for the heads up though, Deanna.

1) Undead and Unwed**** by MaryJanice Davidson 1/2/2011
I am a huge fan of chick-lit and paranormal romance, so combining the two genres is like reader heaven for me. Seriously, you get the best of both genres with this book: the insecure but lovable protagonist, her bad ass vampire crush, and some steamy sex scenes. What more could a girl ask for?

I was not going to stumble around like a zombie, scaring the hell out of people and pretending I still had a place in the world. "God," I said, teetering for balance, "I'm coming to see you know."

Betsy is having a horrible week. Not only did she die in a tragic accident, she has awaken a vampire-in horrible shoes at that. After coming to terms with her new (undead) life she manages to piss off the head vampire, become a crime fighting vigilante, and oh yeah, learns of a prophecy that will make her the queen of the undead. Whew!

I enjoyed this book more than I thought I would and I seriously had to cry from laughing too hard. This isn't a stimulating read so don't approach it looking for the secrets of the universe and such. This book should be read if you're sad, stressed, and looking for a a pick me up-that's calorie free.

I'm glad you enjoyed it...it's definitely NOT high-brow but SOOOO very entertaining! Have you read any Janet Evanovich?

Yup, I read some her stand alone books and I the Stephanie Plum series but I started to get bored because they were a bit repetitive.

I'm a huge fan of Sophie Kinsella, but I must confess a secret: I'm not a fan of the Shopaholic series. Even though it is, without a doubt,the series that catapulted her to fame, I've never really impressed by the books. So I didn't read this expecting to be charmed or thoroughly caught up in Rebecca's antics. But you know what they say...sixth time's the charm. Or something like that. This being the sixth book in the series I've decided to make a list of my six likes and dislikes.

1) "Becky's art form is unique," Luke suddenly chimes in. "She creates...unreal worlds. Fantasyland, some might call it." Rebecca's escapades reaches an alarming high in this book. It amuses me to read about the lengths she will go to just to achieve life's everyday necessities.
2) I really enjoyed the story but I felt that some portions were a repetition of the other books in the series. For example: Rebecca and Suze's fight reminded me of the one they had in Shopaholic and Sister and Rebecca's suspicion of Luke reminded me of Shopaholic and Baby.
3)Like mother, like daughter...If you thought Rebecca was a handful, wait until you read about Minnie. She is the embodiment of the phrase "terrible twos." Already banned from four shopping malls, she settles her need for retail therapy by shopping online, and making frequent trips to Starbucks for her much loved "biscuits".
4) Rebecca and Luke's marriage bothered me a lot. Luke sends out major sugar daddy vibes-granted he and Becky are almost the same age but he barely spends ten pages of the book without her Blackberry or running off to work.His priorities seem to be work, Blackberry, Becky and Minnie (in that order).
5) Just the fact that I had to cry from laughing too hard.
6) Many things were left unsaid. Kinsella failed to mention what the altercation between Luke and his mother was and she also failed to deliver a reconciliation between mother and son. I guess we'll have to wait for another book.

Dear Scholastic Inc,
I bought Thu-Huong Ha's, Hail Caesar on December 11, 2011 for $1 at a local book fair. I was thoroughly disappointed by the book and offended by Ms. Ha's misrepresentation of teenage like. Contrary to popular belief, teenagers do not speak like this: "I do not think. I do not breathe. I am in party mode. I am the Dictator," or, "sup .nmu. jc. im hungry. u wanna get sum food. some over here. we got some shit. aight."
It is with great regret (on your part) that I request my $1 back or (preferably) the 3 days of my life I spent wasted reading this book.

I've never made my distate for the classics a secret but let it be known that I din't dislike this book for it allusion to Julius Caesar. I disliked this book because a) it sucked and b) it was poorly written. Seriously, did this book have an editor? And who in their right mind would publish this? The author tried to base her character, John, on Julius Caesar- with a modern twist. Unfortunately it became quite obvious on page three that she was unsuccessful at achieving this. What was on page 3 you ask? Slam the car door. I stride into the parking lot and toward the brick school: Laurence High School, Home of the Lions. Roar. Life in suburbia's public high schools doesn't get much more complicated than dicks, chicks, and a lot of chicks. Are.you.fucking.kidding.me?! I should get a prize for finishing this book!

In order for me to fully capture the essence of this book I must do the most clichéd review I can think of.
(Review to be added later)


Sometimes in the midst of reading a book you learn invaluable lessons, ones that you know will stay with you forever. While reading this book I came across a line that while simple was unbelievably profound: Life, I’ve learned is never fair. If people teach anything in school, that should be it. I’m neither privileged nor naive enough to think that life is (or ever has been) fair, but the ease in which Nicholas Sparks delivered this line spoke to me.
Despite seeing this movie countless times, I still managed to cry my eyes out and have my heart broken all over again. Nicholas Sparks is a genius and thirty years from now this book will be a classic.
Synopsis
Created by Sashana
While taking a stroll, London Carter aged 57 remembers his life at 17 years old. It was a year, he remembers, filled with joy and sadness. In that year, he became the man he is today and learned lessons of unlimited faith and love. His teacher? 17 year old Jamie Sullivan, who is unmatched in her unshakeable faith and goodness. But when tragedy strikes Logan and Jamie must learn the true meaning of love, loss, and faith.
Comparison between book and movie 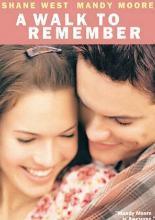 Surprisingly both the book and movie was enjoyable, despite a few minor differences.
1) The majority of the book was set in the late 1950’s while the movie was set in the early 2000’s. That’s a fifty year time difference so the tone of the book is slightly different from that of the movie.
2) In the movie Landon was a tall, dark, and handsome bad boy but in the book Landon was just your average teenage boy; he was neither popular nor unpopular, neither a saint nor a delinquent. This, I think, also has something to do with the time difference.
3) In the movie Landon’s father was a doctor who divorced him and his mother. In the book London’s father is a politician and his parents are married, although his father isn’t around much.