Mod
This is a thread to discuss other APPLE products like the iPOD or the notebook or iMAC. 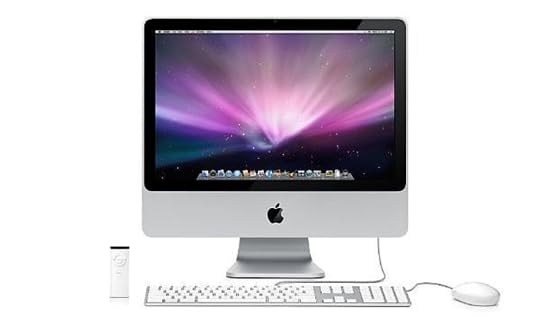 According to SemiAccurate, Intel will provide Apple with an ultra-high performance version of its Haswell for Apple's upcoming MacBook Pros. The report claims that the chips will include a special version of Intel's highest-end GT3e (Iris Pro 5200) integrated graphics.

Apple has requested a special top bin cream-of-the-crop GT3e selection from Intel, with "as much GPU power as possible." With the top chips going solely to Apple, that leaves the slightly less desirable remains for Intel's other customers.

It was widely assumed that Apple would release its next generation Haswell-based MacBook Pros at WWDC alongside the Haswell MacBook Airs, but that did not happen. Both the 13-inch and the 15-inch MacBook Pros have since shown up in benchmark results, however, suggesting that a release is coming soon.

The benchmarked 15-inch MacBook Pro revealed a Core i7–4950HQ chip running at 2.4 GHz, along with Iris Pro 5200 integrated graphics, which, as noted, are the best that Intel has to offer. Intel’s promotional materials have suggested that the Iris offers 2–2.5x the performance power as the i7–3840QM chip with HD Graphics 4000 in the current high-end Retina MacBook Pro, but the new Retina MacBook Pros could see even greater performance boosts. 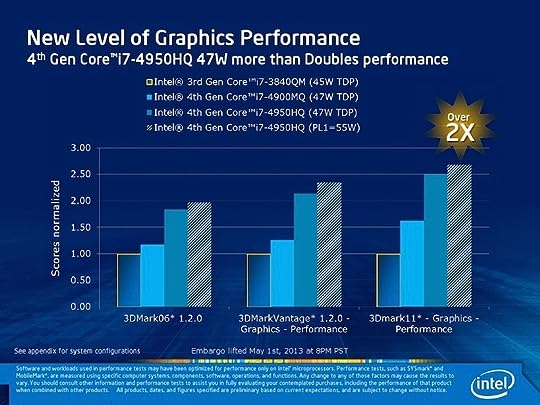 Earlier this week, KGI Securities analyst Ming-Chi Kuo suggested that the updated MacBook Pros will launch in mid-September. It is unclear if Apple will refresh both the Retina MacBook Pros and the standard MacBook Pros, but many believe that Apple is planning to phase out the non-Retina varieties.

Mod
It is - having worked for the largest computer company at one time - I have to say that the Macs are a pleasure.

I've only ever owned Apple products . . . since my choice in 1984 of the original Mac with 128K and no hard drive. I had been looking at computers for about six months and would have bought a Lisa but couldn't afford one . . and then the Mac came out and I watched a demo at the local computer store and I was hooked . . . for awhile I was a member of the SF Users group and went to a few meetings where we devotees would kick around what we would like to see next.

I've never had an issue with any of my devices . . . except having a battery replaced. And all my devices still work . . .

Christopher wrote: "Oh man the original Mac--do you still have it??

Those older Dells can be quite terrible, I remember how poor they used to be. Things are much better now thankfully."

Mod
Love my Macs - what about all of you.

Mod
Inside Apple: How America's Most Admired--and Secretive--Company Really Works

by Adam Lashinsky (no photo)

INSIDE APPLE reveals the secret systems, tactics and leadership strategies that allowed Steve Jobs and his company to churn out hit after hit and inspire a cult-like following for its products.

If Apple is Silicon Valley's answer to Willy Wonka's Chocolate Factory, then author Adam Lashinsky provides readers with a golden ticket to step inside. In this primer on leadership and innovation, the author will introduce readers to concepts like the "DRI" (Apple's practice of assigning a Directly Responsible Individual to every task) and the Top 100 (an annual ritual in which 100 up-and-coming executives are tapped a la Skull & Bones for a secret retreat with company founder Steve Jobs).

Based on numerous interviews, the book offers exclusive new information about how Apple innovates, deals with its suppliers and is handling the transition into the Post Jobs Era. Lashinsky, a Senior Editor at Large for Fortune, knows the subject cold: In a 2008 cover story for the magazine entitled The Genius Behind Steve: Could Operations Whiz Tim Cook Run The Company Someday he predicted that Tim Cook, then an unknown, would eventually succeed Steve Jobs as CEO.

While Inside Apple is ostensibly a deep dive into one, unique company (and its ecosystem of suppliers, investors, employees and competitors), the lessons about Jobs, leadership, product design and marketing are universal. They should appeal to anyone hoping to bring some of that Apple magic to their own company, career, or creative endeavor.

-The most important Marxist cultural theorist after Gramsci, Williams' contributions go well beyond the critical tradition, supplying insights of great significance for cultural sociology today... I have never read Williams without finding something worthwhile, something subtle, some idea of great importance-
- Jeffrey C. Alexander, Professor of Sociology, Yale University

Celebrating the significant intellectual legacy and enduring influence of Raymond Williams, this exciting collection introduces a whole new generation to his work.

Jim McGuigan reasserts and rebalances Williams' reputation within the social sciences by collecting and introducing key pieces of his work.

Providing context and clarity he powerfully evokes the major contribution Williams has made to sociology, media and communication and cultural studies.

Powerfully asserting the on-going relevance of Williams within our contemporary neoliberal and digital age, the book:

Original and persuasive this book will be of interest to anyone involved in theoretical and methodological modules within sociology, media and communication studies and cultural studies.

According to Journalism Professor at Columbia University - Todd Gitlin - "This is an inaugural lecture Raymond Williams gave in 1974, when he assumed a professorship in drama at Cambridge University.

He’s one of the most fertile minds when it comes to media in the last century. Basically he’s saying that it’s extremely odd, and yet central, to the form of civilization that has evolved, that there’s so much drama.

And what he means by drama is not simply normal plays, but everything from advertising to television serials, to the contents of newspapers and magazines. He died in 1988 before a lot of the new technology we have now appeared; he had not encountered the iPhone.

But he anticipates a life in which people are immersed in narrative nonstop. I would add sound, or song, as another important component. This article is, at least to my way of thinking, the earliest statement of the point that quantity becomes quality.

The quantity of a certain kind of media experience creates a different way of life, which is in fact ours. Williams directed us into the whole problem of media saturation as a phenomenon worthy of treatment in its own right. -- Journalism Professor at Columbia University - Todd Gitlin in interview with Five Books

Inside Apple: How America's Most Admired--and Secretive--Company Really Works (other topics)
Raymond Williams on Culture & Society: Essential Writings (other topics)