239 views
THE FIRST WORLD WAR > BATTLE OF THE SAMBRE

Mod
This is the thread to discuss the Battle of the Sambre.

The Battle of the Sambre

At the front, German resistance was falling away. Unprecedented numbers of prisoners were taken in the Battle of the Selle, and a new attack was quickly prepared. The French First Army and the British First, Third, and Fourth Armies were tasked with advancing from south of the Condé Canal along a 30-mile (48 km) front toward Maubeuge-Mons, threatening Namur. Together with the American forces breaking out of the forests of Argonne, this would, if successful, disrupt the German efforts to reform a shortened defensive line along the Meuse.

At dawn on 4 November, 17 British and 11 French divisions headed the attack. The Tank Corps, its resources badly stretched, could provide only 37 tanks for support.
Battle

The first barrier to the northern attack was the 60–70-foot (18–21 m)-wide Sambre Canal and the flooded ground around it. It was there that the BEF had fought over four years earlier. The XIII and IX Corps reached the canal first. German guns quickly ranged the attackers, and bodies piled up before the temporary bridges were properly emplaced under heavy fire. The 1st and 32nd Divisions of IX Corps lost around 1,150 men in the crossing, including celebrated war poet Wilfred Owen. Even after the crossing the German forces defended in depth amid the small villages and fields, and it was not until midday that a 2-mile-deep (3 km) by 15-mile-wide (24 km) breach was secured. Lieutenant Colonel D.G. Johnson was awarded the Victoria Cross for leading the 2nd Battalion Sussex Regiment's crossing of the canal.
Further information: Capture of Le Quesnoy (1918)

Further north, IV and V Corps attacked into Forêt de Mormal. At Le Quesnoy, the Germans defence was haphazard: the 13th Royal Welsh Fusiliers hardly needed to use their guns, while the 9th Battalion of the 17th Division lost all but two officers and 226 of 583 soldiers. Despite this, the advance continued and the battle objectives were reached on the 4th or the following day.

To the south, the French First Army attacked, capturing the communes of Guise (the Second Battle of Guise) and Origny-en-Thiérache (the Battle of Thiérache).

From this point, the northern Allies advanced relentlessly, sometimes more than five miles a day, until the Armistice Line of 11 November from Ghent, through Hourain, Bauffe, Havré, to near Consoire, and Sivry. 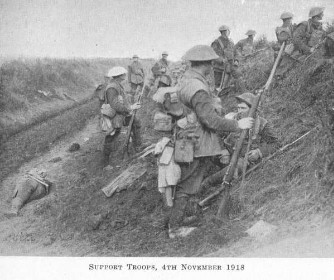 Lecture on Land Warfare: A Tactical Manual for he Use of Infantry Officers; An Examination of the Principle Which Underlie the Art of Warfare....Battle of the Sambre, November 1-11, 1918

No GR blurb on this book but the title seems to be pretty self explanatory as it applies to the Battle of the Sambre.

The last great battle of World War I is remembered with text and photos.

The scaling of the walls of Le Quesnoy by New Zealand troops at the Battle of the Sambre. Painted by George Edmund Butler. 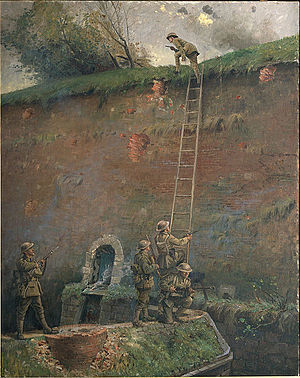 Mod
The Last Battle: Victory, Defeat, and the End of World War I

Author of The Great War, as well as celebrated accounts of the battles of the Somme, Passchendaele, Jutland, and Gallipoli, historian Peter Hart now turns to World War One's final months. Much has been made of-and written about-August 1914. There has been comparatively little focus on August 1918 and the lead-up to November. Because of the fixation on the Great War's opening moves, and the great battles that followed over the course of the next four years, the endgame seems to come as a stunning anticlimax. At the eleventh hour of the eleventh day of the eleventh month of 1918 the guns simply fell silent.

The Last Battle definitively corrects this misperception. As Hart shows, a number of factors precipitated the Armistice. After four years of bloodshed, Germany was nearly bankrupt and there was a growing rift between the military High Command and political leadership. But it also remained a determined combatant, and France and Great Britain had equally been stretched to their limits; Russia had abandoned the conflict in the late winter of 1918. However complex the causes of Germany's ultimate defeat, Allied success on the Western Front, as Hart reveals, tipped the scales-the triumphs at the Fifth Battle of Ypres, the Sambre, the Selle, and the Meuse-Argonne, where American forces made arguably their greatest contribution. The offensives cracked the Hindenburg Line and wore down the German resistance, precipitating collapse.

Final victory came at great human cost and involved the combined efforts of millions of men. Using the testimony of a range of participants, from the Doughboys, Tommies, German infantrymen, and French poilus who did the fighting, to those in command during those last days and weeks, Hart brings intimacy and sweep to the events that led to November 11, 1918.

He has been an oral historian at Sound Archive of Imperial War Museum in London since 1981.

Librarian Note: There is more than one author in the Goodreads database with this name.

"Written by one of Britain's best scholars of the Great War, The Last Battle follows Hart's usual synergy of well-paced analytical text with first-hand accounts by participants. These are especially well chosen: Hart's knowledge of and sensitivity to this material reflects his years of work at the Imperial War Museum. He evaluates the respective contributions of the Allies and the growing debility of the Germans with a sharp eye for both battlefields and home fronts as the combatants put their last, best efforts into a war that had exhausted both sides, and whose physical and spiritual scars endure today." --Dennis Showalter, Colorado College

"Well written, with an exceptional collection of personal narratives, this book provides a fascinating look at the last four months of World War I."--New York Journal of Books

Decisive Victory: The Battle of the Sambre: 4 November 1918

by Derek Clayton (no photo)

The Battle of the Sambre, 4 November 1918, was a decisive British victory. The battle has, however, been largely neglected by historians: it was the last large-scale, set-piece battle fought by the British Expeditionary Force on the Western Front: the Armistice was only one week away. Seven Victoria Crosses were won and the poet Wilfred Owen was killed in action. In scale it was similar to the first day of the Battle of the Somme: thirteen divisions of the BEF led the assault on a frontage of approximately twenty miles, supported by over a thousand guns, with initial plans presuming an involvement of up to seventy tanks and armoued cars. The German Army was determined to hold a defensive line incorporating the Mormal Forest and the Sambre-Oise Canal, hoping to buy time for a strategic withdrawal to as yet incomplete defensive positions between Antwerp and the Meuse river and thereby negotiate a compromise peace in the spring of 1919.

This is the only book devoted solely to this battle and includes original, bespoke, color maps covering every inch of the battlefield. The work analyses the battle at the operational and tactical levels: the BEF was no longer striving for a breakthrough – sequential ‘bite and hold’ was now the accepted method of advance. Drawing on information largely from unpublished archives, including over 300 formation or unit war diaries, Dr Clayton casts a critical eye over the day’s events, examining the difference between plan and reality; the tactical proficiency of units engaged; the competence of commanders, some of whom proved capable of pragmatic flexibility in the face of stubborn enemy resistance and were able to adapt or even abandon original plans in order to ensure ultimate success. The role of the Royal Engineers is also highlighted, their tasks including devising improvised bridging equipment to facilitate the crossing of the waterway. Other questions are raised and answered: to what extent was this an ‘all-arms’ battle? Where does this engagement fit in the context of the BEF’s ‘learning curve’? Was it necessary to fight the battle at all? Was it indeed decisive?

Dr Clayton’s analysis places the battle into its wider strategic context and reaches important, new conclusions: that this victory, hard-won as it was by a British army, hampered by logistical, geographical and meteorological constraints and worn down by the almost continuous hard fighting of the summer and autumn, irrevocably and finally crushed the will of the German defenders, leading to a pursuit of a demoralized, broken and beaten army, whose means of continued resistance had been destroyed, thus expediting the armistice.