,
Discover new books on Goodreads
See if your friends have read any of John Keegan's books 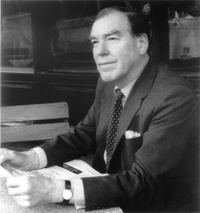 Born
in Clapham, London, The United Kingdom
May 15, 1934
Died
August 02, 2012
Genre
Military History, Biographies & Memoirs
edit data
Sir John Desmond Patrick Keegan, OBE, FRSL was a British military historian, lecturer and journalist. He published many works on the nature of combat between the 14th and 21st centuries concerning land, air, maritime and intelligence warfare as well as the psychology of battle.

4.05 avg rating — 18,618 ratings
Quotes by John Keegan  (?)
Quotes are added by the Goodreads community and are not verified by Goodreads. (Learn more)
“For our purpose, however, what the soldiers did or did not read is irrelevant. For, if soldiers did not learn to fight their battles from reading books, neither is it likely that military historians learned to write their books from watching battles. Battles are extremely confusing; and confronted with the need to make sense of something he does not understand, even the cleverest, indeed preeminently the cleverest man, realizing his need for a language and metaphor he does not possess, will turn to look at what someone else has already made of a similar set of events as a guide for his own pen.”
― John Keegan
14 likes
Like

“In 1861, on the eve of the Civil War, Grant, aged thirty-nine, with four children at home and scarcely a penny in the bank, had made no mark on the world and looked unlikely to do so, for all the boom conditions of mid-century America. His Plymouth Rock ancestry, his specialist education, his military rank, which together must have ensured him a sheltered corner in the life of the Old World, counted for nothing in the New. He lacked the essential quality to be what Jacques Barzun has called a “booster,” one of those bustling, bonhomous, penny-counting, chance-grabbing optimists who, whether in the frenetic commercial activity of the Atlantic coast, in the emergent industries of New England and Pennsylvania or on the westward-moving frontier, were to make America’s fortune. Grant, in his introspective and undemonstrative style, was a gentleman, and was crippled by the quality.”
― John Keegan, The Mask of Command
12 likes
Like

“It is one of the many graveyards which are the Great War's chief heritage. The chronicle of its battles provides the dreariest literature in military history; no brave trumpets sound in memory for the drab millions who plodded to death on the featureless plains of Picardy and Poland; no litanies are sung for the leaders who coaxed them to slaughter.”
― John Keegan
6 likes
Like