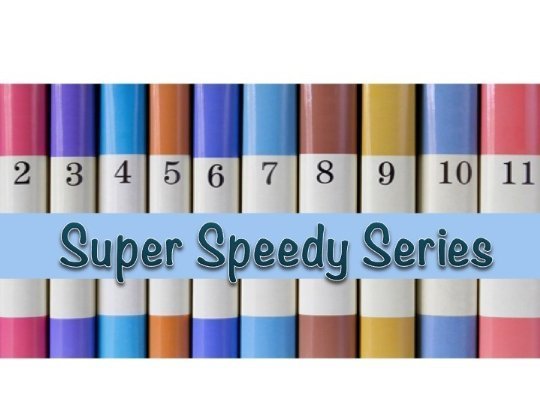 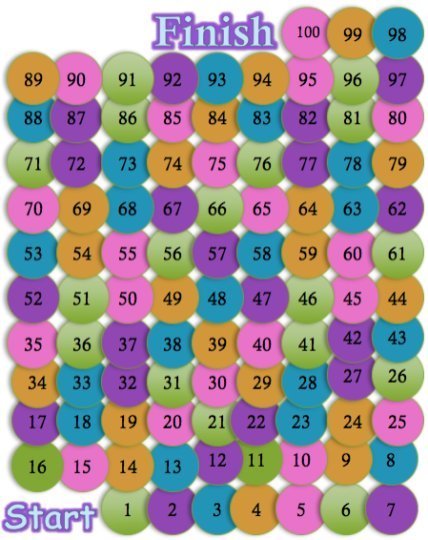 ✸ This is a team challenge that requires 2 books a week . The object of the game is to roll the die and move along the board. To win a team must roll past 100. Teams will roll on Thursdays & Sundays.

✸ Team are formed at random.

✸ Teams will roll the die by clicking here on Sundays and Thursdays once their team has completed their reads. Please note you will have to change the dice to ONE die.


Holiday Scheduling:
✸Thanksgiving: Teams will roll the Sunday before (11/22). No roll on Thursday (11/26). Reviews are due and the next roll will be Sunday (11/29) and at this point the game resumes its normal schedule.


**VERY IMPORTANT**
A team CANNOT advance if all the reviews are not complete and in by the deadline. Reviews are due at the latest by end of day on Thursday and Sunday respectively - 11.59pm Central Time. Without a free pass to cover a review still missing by deadline, the team will have to sit out the next roll. That being said, players should have their reviews in on Wednesday (for the Thursday roll) and on Saturday (for the Sunday roll). Your team captain cannot roll until ALL of the team reviews have been posted.

❖If a player fails to have their book done two times throughout the game (excluding a prearranged absence) they will no longer be a part of the team.

✸ Prearranged absence must be requested from the moderator in charge by pm or in your team thread before the team rolls for the period you need to skip.


HOW TO PICK A BOOK:
✸ Books are based on the spot you're on, not the roll of the die.
If you land on single digit spot, for example let's say you land on spot 5, then you have to read a book that's #5 in a series. For double digit numbers, for example you land on spot 48 you can read either a #4 or a #8 in a series.
✸ Standalone books can be used for a 1 or a 0
✸ First in a series can be used for a 1
✸ I don't expect anyone to read a series out of order and for people that don't read series books that still want to play there will be an alternate option. There will be an alternate option for each spot.
✸ Half books: ½ or .5 count only if they meet the page requirement AND will be judged by preceding whole number numeral on Goodreads.
Example: Spot 8: A MacKenzie Clan Gathering (MacKenzies & McBrides, #8.5) would count for spot 8 because it meets the page limit.
✸ Books in multiple series can be used for ANY of the series. An example: Azagoth (1001 Dark Nights, #6; Lords of Deliverance, #5.5; Demonica, #10.5) can be used for spot 6 for 1001 Dark Nights, spot 5 for LoD or spot 10 for Demonica because it meets the page limit.


✸ There will be a separate thread for captains to post their place on the board after rolling and to post a link to the team's completed reviews.


FREE PASS
✸ Teams will have a chance to earn 1 Free Pass to roll. To earn your free pass your team has to complete their reads a day before the next roll. Once your team has done this you will have 1 free pass. The free pass will allow a team to roll if they are missing a review(s) before the cutoff. Once you've used it, you can't earn another one. It's a one-time shot.
NOTE:
✸ The free pass may not be used for the win.
✸ If the player whose review the free pass is covering for has already previously missed a deadline, they must submit the missing review within one day after the deadline if they wish to retain their place on the team.


✸ Re-reads are allowed ( ~EXCEPT on Winning Spots, no re-reads to win)
✸ Page limit: min. 140 pages
✸ When using an anthology you may use any of the numbers in the book except for the .5 since this means ½. But you must review each story in the anthology. The same applies to short story collections.
✸ Series # will be based on how GR has it listed.
✸ Comics, graphic novels and manga don't count for this challenge
✸ Deadline cutoffs are based on US Central time zone

Mod
ALTERNATE LIST:
**titles exclude leading articles (a, an, the)

★ You can use any edition of the book you read.
★ Books must be started after your team has rolled.
★ Review posts MUST include the following: Book title, author, cover, how it qualifies for the spot you're on, date finished, rating, review (min. 3 sentences)

Alternates:
★ Publication years: any edition so long as it is published in the given year
★ Cover Colour: must be at least 50% (see guidelines in post below)
★ Cover Item: must have the given item on the cover
★ Locations: book must be set at least partially in the given location
★ Author letters: author's first, middle, or last name must start with the given letter
★ Title letters: first word in the title starts with the given letter, excluding the lead ARTICLE (The, A, An...)

FOR THOSE PLAYING BOTH
★YES, you can use the same book in both challenges.

Review:
Testifying against his partner and getting him locked up for murder leaves Detective Dex Daley deserted by his friends and colleagues as well as his boyfriend, a repeat target of violence, and on his way out of the job at the Human Police Force he loves. Instead of fired, however, he is recruited to join the elite Therian-Human Intelligence Recon Defense Squadron (THIRDS), working side by side with shapeshifters as a Defense Agent. Tossed right into the middle of a murder investigation, Dex has to get accustomed to his new situation quickly - and the fact that his new team is still reeling from the loss of one of their own and not at all happy to integrate his replacement really doesn't help. Neither does the fact that Dex's new teamleader may be a jerk, but he's a very attractive one.

These books have been on my TBR for ages, and I'm glad to finally get around to reading them. It took me a while to get into the story, familiarise myself with the universe (I'm really, really not a fan of "let me explain the entirety of my worldbuilding to you textbook-style" prologues, so I was immediately a little dubious about the whole thing), get to know the characters and pick up the terminology, but after a few chapters I was thoroughly hooked. Looking forward to continuing this series.

When using the alternate that involves cover items, colors, or publications years, please be sure to link the correct edition to show how the book qualifies.

Cover colour alternates tend to be a little tricky, since it can be very hard to tell whether something is 50% a certain colour. Here's a handy little 3-step guide for figuring out whether your chosen book qualifies.

1) Use your own judgment. If a book cover is quite clearly overwhelmingly the colour in question, you don't need additional verification.

2) When in doubt, you can use this tool TinEye Labs to check a cover. If TinEye confirms your cover is at least 50% the colour in question, go ahead and use it.
Note: You may need to uncheck "Exclude background color from extracted colors" to get a proper result.

3) If it's a close call (say, 40-49.9% the right colour according to TinEye), or TinEye gives you a result you vehemently disagree with (apparently it does that sometimes, unfortunately), or you have trouble using the site/ would generally prefer a human opinion, post the book cover in question to the discussion thread and ask me. I reserve the right to overrule TinEye in cases of a close call or dodgy result.

(44.9% grey according to TinEye. I chose to overrule and let the player use it.)
Orange:

(41.1% orange according to TinEye. I would probably choose to overrule.)

Hi! Team 1 would like our name to be “Formula 1 Readers”. I will be captain. Thanks! Patti

Team 3 will be "The Dewey Decimators" and I'm the captain. Thanks!

Just to confirm -- I'm rolling at midnight CST?? Or is it tomorrow? Thursday at 11:59? That's what I thought. So confused already lol

Mod
You're good to roll now. No worries, you'll get the hang of it in no time. :)

HI Denise: Team Formula 1 should actually have 3 bonus spots completed. I'm probably posting these wrong, so sorry in advance. Here is the link to the completion post where we (actually, M) earned our 3rd point. Please let me know if I should be doing this differently. Thanks so much! Patti

Mod
Maddielucy(Patti) wrote: "HI Denise: Team Formula 1 should actually have 3 bonus spots completed. I'm probably posting these wrong, so sorry in advance. Here is the link to the completion post where we (actually, M) earned ..."

Sorry, I missed that one! Updating your thread. Thx for letting me know! :)
If you could note it in the post your spot thread when you link your reviews, that'd be great - if I've already seen that all your reviews were in on time, I might not check again when you post the new spot.

What would an alternate 'Africa' entail?
1) Setting in Africa? 2) Africa mentioned in the book? 3) The author from Africa? 4) Absolutely any African connection? 5) Anything else or all of these?

Mod
Setting. Doesn't have to be the entire book, but at least part of it must be set somewhere in Africa.
(Same goes for other alternates where it just states a continent, the book must be partially set there.)

Denise wrote: "Setting. Doesn't have to be the entire book, but at least part of it must be set somewhere in Africa.
(Same goes for other alternates where it just states a continent, the book must be partially s..." Okay, got it. Thanks!

Would this work for #2 in a series? Of Literature and Lattes. It's a sequel, but not marked as #2.

Mod
Library wrote: "Would this work for #2 in a series? Of Literature and Lattes. It's a sequel, but not marked as #2."

I'm afraid not. To quote from the rules above:
✸ Series # will be based on how GR has it listed.

Mod
It is! Was I a scatterbrain and put the wrong date in the rules? Sorry about the confusion, will get that fixed once I'm home!

Mod
Yes, doesn't matter if you read them for series number or alternate, as long as all books are read as part of the game you can claim the bonus.

Denise wrote: "Yes, doesn't matter if you read them for series number or alternate, as long as all books are read as part of the game you can claim the bonus."Okay, thanks!


What number series work? Does 10 work?