A Brian Glover quote from the 1st episode of 'Porridge' with which our lovely Tech started off his Book Thread followed by ...

"feel free to share what books you're reading or wish to recommend" ...

And the last Book Posts on Amazon were from Tech with :

"alan moore knows the score, and Fashion Beast in practically mint condition, cost me twa poonds ootta british heart - conceived by moore and Malcolm mclaren as a movie script, which never got made, the idea was revived by moore for a 10 part comic series, collected here in one volume.we'll see how it goes"

".......and it's a strange, and not terribly satisfying, tale about fashion in a dystopian future, and loosely based on 'beauty and the beast'. and on graphic novels, this one already has the thumbs up from the subject, Nick Cave: Mercy on Me"

Followed by Val with :

"I'd still read (and maybe contribute) to a "book" thread within the Amazon Exiles umbrella over on Goodreads. I recently finished Hannah Kent's "The Good People" (oh, oh - another nail in the coffin : the "Insert A Product" link isn't working!). I haven't read "Burial Rites" and everyone raves about that but this was unrelenting doom and gloom. Marvellous research about life in rural Ireland in the 1820s, the superstitions and beliefs closely held, but it never let up for a moment. If you can be bothered looking it up here, the first review (3 stars by Roz) summed it up perfectly for me. To counterbalance the misery I've had to wrap myself in the cuddly blanket that is Maeve Binchy and have flown through (re-reads) of "Quentins", "Heart And Soul" and "Whitethorn Woods". Because she had a habit of re-cycling her characters in her later novels, it can be a bit disconcerting reading them out of order, but I can cope. I've also got a few other books open in various stages including Mollie Panter-Downes' "London War Notes". I love her fiction but this series of articles written for The New Yorker as a British civilian's view of home life during WWII is a bit gung-ho, jolly hockey sticks, etc. I have to keep telling myself it is a bit of propaganda - trying to keep the Americans onside and interested in the War while simultaneously demonstrating how calm and plucky the Brits could be. I also bought with delight Jimmy Webb's memoir "The Cake and the Rain" only to find myself dreading reading another chapter. Flashing back and forth from his pre-fame years to the height of his success does not work as a format. I loved his earlier book "Tunesmith" but this is just tiresome"

And mister joe with :

"Finished Lord Of The Flies. As everyone knows great. Half way through Catch 22. Good god just brilliant writing"

Well, I know tech wasn't too sure about whether to bring this over but Goodreads is supposed to be a Book site for Book lovers in Book Groups to discuss Books on Book Threads - LOL!!! - and I have always enjoyed reading this Thread ;o>

Well, I know tech wasn't too sure about whether to bring this over....

that'll save any more humming and hawing, thanks very much, suzy. but it'll never catch on! :)

about a third thru' this, very much enjoying wilson's particular slant on things, and his sense of humour - many references to characters and events in.......

I'm in the middle of a really gripping book, so if you've read it at some point, PLEASE don't spoil it for me!
It's all about this insect, a caterpillar to be precise, and he's gripped with a voracious appetite, he keeps eating and eating...

what's it worth not to blow the ending wide open? :)

here's something you didn't get on that auld shighty forum - you can put your name forward to win new books in a raffle stylee. many titles to choose from. i've had a go for the philip k. dick volume that collects the shorts that make up the channel 4 series.

j.b., there is a stuart mcbride title for offer in the above,

Now We Are Dead

40 proof copies up for grabs!

Once upon a time Sheffield Libraries were so broke, they stopped buying fiction. Around the same time, the Sheffield Star ran a prize draw to win book tokens. The 7 of us at my library sent in multiple entries and won 4 £20 tokens between us. Our librarian went down to Waterstones, bought what we’d chosen and donated them to our stock. The Library Committee (including Roy Hattersley’s mum) were absolutely furious. Great days indeed.

what's it worth not to blow the ending wide open? :)" Nooo!

4th Earl wrote: "I'm in the middle of a really gripping book, so if you've read it at some point, PLEASE don't spoil it for me!
It's all about this insect, a caterpillar to be precise, and he's gripped with a vorac..."

When you have finally reached and got over the climactic ending of 'The Hungry Caterpillar' may I suggest that you try this next ...

I hope you didn't buy one of Roy Hattersley's novels.

Two great memories of Hattersley's appearances on Clive Anderson Talks Back around 1990:

Hattersley: There are no stereotypes in this book (The Maker's Mark). There's no tripe & onions in this book.
Anderson: Well, there's no onions anyway.

Hattersley: I like to think of myself as like Chris Waddle...
Anderson: You've both got a good dribble.

Enid H. was a formidable, well-upholstered lady who had grown men (including Roy) quaking in their boots.

Huck! Huck! You there?

Could you tell us something about the book you put on the forum bookshelf?

Actually, that shelf is looking a bit bare, isn't it?

Actually, that shelf is looking a bit bare, isn't it?

it is, yes, i'll fire on The Illuminatus! Trilogy, because i think everyone would get a kick out of it, and more than just me have read it! hail eris, sera!

well, what a clever boy is i? i managed to add a book to goodreads that wasn't in their database. a ltd ed. of a large form paperback tribute to killie legend ray montgomerie,

my copy is of course signed by the living legend! if you want to view the cover, amazon have a copy (for £50!)

....and another. goodreads quite slack on limited run (practically local) books on the mighty k.f.c.! :)

Who's Who Of Kilmarnock F.C.

Goodreads will surely be forever in your debt ;o>

... whilst bewilderedly scratching their Heads and asking themselves ...

"Where on Earth is this place, Kilmarnock, and why do we now suddenly have a Book Section dedicated entirely to it?"

it's a trouble i have, that i view the likes of real madrid, bayern munich, manchester united, what have you, as mere lowly steps on the way to the pinnacle that is the mighty k.f.c.! :) 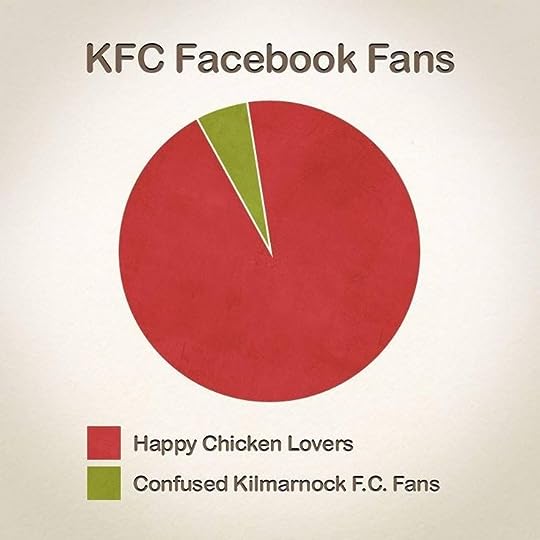 Tech wrote: "....and another. goodreads quite slack on limited run (practically local) books on the mighty k.f.c.! :)

Who's Who Of Kilmarnock F.C."

A book of empty pages? 😉

up for grabs in goodreads 'giveaway' - 3 copies of a hawkwind biography - well, I don't want one! - https://www.goodreads.com/giveaway?so...

I have just taken delivery of James Robertson's book about Michael Marra, "Arrest This Moment".

It looks fab, really looking forward to reading it.

It looks fab, really looking for..."

I presume you’ve seen this, nc?

Mine's in the mail! Hurrah!

Should have added : many thanks, Lez!

Just finished Bad Monkey by Carl Hiaasen, and I'm just glad it's not my first Hiaasen or I'd never have known what all the fuss was about. Not his best effort.

This week I shall mostly be reading Love All the People: Letters, Lyrics, Routines a collection of Bill Hicks material, and being sarcastic.

i'd been thinking of having a go at 'bad monkey', mibbe no bother now!

'love all the people' is a goodread, but gets a little repetitive (and depressing!) at times!

It's not bad Tech, just not up to his best.

it'll go on my wish list (charity shop division) - what do you think is his best? gun to my head, i'd say 'lucky you'!

Tourist Season and Double Whammy have stuck in my mind most. Not read Lucky You. Have to put it on the 'to read' list.

'skink', the governor was a truly inspired character! shame hiaasen killed him off!

https://www.amazon.co.uk/Stornoway-Wa... - might have a go of this next - based on character called r.stornoway (geddit?).

and this is supposed to be good - https://www.amazon.co.uk/Fathers-Musi...

I have a charity shop Stornoway too, tech, it's been in the 'to read' pile for ages. I hadn't twigged 'R Stornoway'. :)

freebie for n.c. and j.b., mibbe aye, mibbe naw (no reviews as yet)

Thanks, tech. I suspect there's a good reason it's free, but nothing to lose by adding it to the Kindle, so I'lll give it a go.

Schrödinger's Cat Trilogy was a riot. went round the houses to get where it was going, but a wild ride altogether!

started and finished Twin Peaks: The Final Dossier, essential stuff, tied up a few loose ends and fattened up some relevant issues, but is a bit on the brief side!

commenced Lee 'Scratch' Perry: Kiss Me Neck: The Scratch Story in Words, Pictures and Records, a biography/discography on the upsetter. a quick look sees the discography as well extensive, and voluminous! and, if you're reading, helen, it's on CHERRY RED books

Craig wrote: "Schrödinger's Cat Trilogy was a riot. went round the houses to get where it was ..."

Helen The Melon wrote: "Craig wrote: "Schrödinger's Cat Trilogy was a riot. went round the houses to get where it was ..."

And simultaneously not reading! 😋

polished off Lee 'Scratch' Perry: Kiss Me Neck: The Scratch Story in Words, Pictures and Records, and don't think I've ever read a more comprehensive discography - on anyone, this is meticulous. however, it's light on the biography, so for the full picture you'll need david Katz's excellent 'people funny boy'. commenced 20 Jazz Funk Greats, no.54 in the 331/3 series - author's intro to t.g. is similar to mine (attracted initially by the name), but from an American viewpoint. this is quite a thick volume to others in series, and looks promising.