By GUILLERMO del TORO and CHUCK HOGAN
Published: July 31, 2009
"Vampire creature myths seem to cross every culture, language and era, and one clue to their continuing appeal may be because they emphasize the eternal in us."

Personally, I don't see it. Seeing Anna Paquin rolling around with one in the dim light is okay for me -- but the rest of it? Nah.

What about you? Are you on board the Vampire Express? 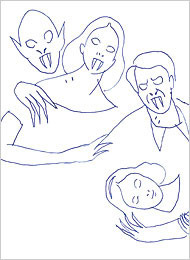 I think the myth of vampires will always be intriguing. There is something alluring and menacing about their otherworldly nature. I get bored reading and watching the “real world” so it’s a nice reprieve to read or view the supernatural world.

But I prefer my vamps to look like this :)
http://gallery.robertpattinson.org/di...

Before this conversation devolves into an analysis of Edward's eyebrows, let us acknowledge female vampires, thank you very much...

I still have to catch up on True Blood, but Anna Paquin in that outfit she wears while she's working...distracting, to say the least. I would have a hard time ordering. And it would be even worse knowing she could read my mind.

Anna's teeth bother me, I know that's petty, but its true. I do enjoy watching Eric though.

I enjoyed both the book and movie "Let the Right One In".

I loved the Underworld movies. The first and third more so than the second.

Koeeoaddi wrote: "Vampires, zombies and werecreatures bore the crap out me.

LOL. I haven't seen that before. Thanks for the link.


You know what they say: big feet, big shoes.

That was one of my minor complaints about Twilight, Buns. The dude was supposed to be about ninety! You think he would have worked out how to talk to girls by then.

I've never been into vampires myself. Perhaps it's because I saw the Boris Karloff Dracula movie at too young an age? (Was it Karloff?) Anyway, nope, I don't get the fascination.

Unless it's because I'm sexually repressed? hee.


You know what they say: big feet, big shoes.
"

So can we deduce from my deep fascination of vampires and my, er, colorful childhood, that I'm not?

Randomanthony wrote: "That was one of my minor complaints about Twilight, Buns. The dude was supposed to be about ninety! You think he would have worked out how to talk to girls by then."

Okay, I'm just going to give my two cents on that.

Edward was a recluse before being made a vampire, and according to the books, Edward didn't socialize outside of his vampire circle for the duration of his vampirism... until Bella.

He strictly matriculated and ate sweet mountain lions. Anyone who's isolated from society would still be stunted emotionally and socially. Add the factor that Edward was isolated from society for 70+ years, and well, I didn't feel the need to complain about that. As for intellectual stunting, from reading the books, I didn't read any evidence of this about any of the vamps - in fact, readers are left with the idea that Edward prefers classical music (DeBussy) to the popular music that emerged through the ages (with the exception of the music from the 50s, which I'd agree is great music) and all other music was crap. Books, reading - he had a full shelf of books - the classics. Meyer covered the schooling and intellectual pursuit bases already - the Cullens even had an inside joke in that they collected graduation caps from all the schools from which they've graduated over the years.

Now this is just my theory about vampires and emotional maturity or lack there of....
I would think that becoming undead, where you exist for eternity, would make you loose touch with humanity. How would you mature emotionally if you have lost your humanness?

So can we deduce from my deep fascination of vampires and my, er, colorful childhood, that I'm not?"

I don't mind Anna P's teeth as much as her strangely done Mi'ssippi/Looziana accent.

Randomanthony wrote: "That was one of my minor complaints about Twilight, Buns. The dude was supposed to be about ninety! You think he would have worked out how to talk to girls by then."

Dang RA, you have put my in an awkward position, I don't want to have to defend this book, but...

He knew how to talk to girls, just chose not to. He isn't human, is a danger to humans, and thus, avoided them as much as possible.

Heather wrote: "Now this is just my theory about vampires and emotional maturity or lack there of....
I would think that becoming undead, where you exist for eternity, would make you loose tough with humanity. H..."

Heather's onto something with this.

Larry wrote: "I don't mind Anna P's teeth as much as her strangely done Mi'ssippi/Looziana accent."

It's very grating when actors and actresses butcher the southern accent. We do not talk like that!

I can see how some would say that Twilight represents LDS culture to a great degree.

My God. I am so not arguing Twilight with a bunch of women. You think I'm crazy?

Sally, I would say yes, especially with what we now know about your mother.... :D

Lori wrote: "Sally, I would say yes, especially with what we now know about your mother.... :D"

Oh I clean forgot about that.

"Heather's onto something with this. "

LOL, I think about these things. Sad, but true. I adored religious studies in college and we often discussed myths and legends as they apply to humanity.

Larry wrote: "I don't mind Anna P's teeth as much as her strangely done Mi'ssippi/Looziana accent."

Yup. Gotcha. I go away for 5 minutes and a lot of stuff happens that I miss. Story of my life.

Actually, there is one vampire movie I'm so looking forward to: Dark Shadows directed by Tim Burton with Depp as Barnabas. Yes! Even tho I never watched the TV show, so not one of the cult members, but I'll go see that for sure.

I think someone should start a new vampire series about cute fuzzy animal vampires (think adorable killer bunnies and kittens and puppies). I'd read it.

I'm on hold for the Guillermo del Toro book. It's been the talk of the YALSA listserve lately. They're comparing it to Peeps, which made me curious about it.

The Strain is on my TBR as well. I liked Peeps but I prefered Westerfeld's Uglies series....

Agreed! And I liked his Midnighters series even more, and So Yesterday even more than that! Because it was about trends, which I find fascinating...

And the vampire craze IS a trend, and we're back!

Haha. Vamps have always been a trend though...so if it is a trend, it has spanned decades. Maybe vamps are like the little black dress, always in style.

I love YA. Its a wonderful genre with talented writers, imo.

And I enjoyed the Midnighters series as well.

Heather wrote: "Maybe vamps are like the little black dress, always in style."

I think you've got something there, Heather!

Vamps are a fun read, Anne Rice does it with style.just my opinion.

And right on cue...Entertainment Weekly ranks the 20 Greatest Vampires Ever...

Edit: Changed link to make sure page had list...

Mod
It's like we're the trend predictors of the universe!

They always forget Louie, the one telling the story of Interview with a Vampire. Just because he was crazy with self loathing and lived on rats. He is always over looked. Poor Louie.

Mod
I love the name Louie. It makes me glow.

Lestat is an awesomely nasty piece of work. Bela Lugosi should have been given top honors though.

Barlow, from Salem's Lot, is the vampire that freaked me out the most of any of them on that list.

Oh yea, he was that bald headed dude right?

Near Dark is a way underrated movie, I agree.

I'm writting this stuff down, what is Nosferatu?

Yeah, Near Dark and Innocent Blood are both overshadowed by the big budget stuff.