One of the coolest things about belonging to an avid community is sometimes you get to meet people and learn things that the average, everyday (boring) person doesn't get to know. It's like that when you get to talk to an author and find out what inspired them to write the space opera we love to read.

It gets doubly awesome when the author happens to be a rocket scientist in real life! That's something you usually don't get in any other community except one devoted to science fiction. A wee bit of hard science peppered in among a tale about hauling freight through the deep recesses of space … using ANALOG equipment! Why? Well, read the interview and find out! 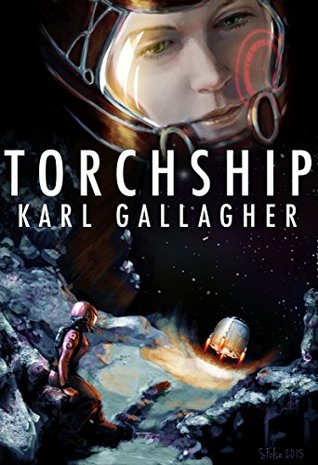 1. What books have most influenced your life?

That’s a long list . . . most of the books by Robert Heinlein and Lois Bujold. I’d have to single out The Moon Is a Harsh Mistress as the single greatest influence. In non-fiction, The Box is an amazing demonstration of how much social change a simple technological change can cause.


2. How do you develop your plots and characters?

As a new author I’m still taking different approaches to this. Sometimes plot first, sometimes characters first, sometimes create a situation and see who emerges. The original seed for Torchship was wondering what would justify a future spaceship pilot using a slide rule the way all those Heinlein characters did.


3. Tell us about your Space Opera Fans book?

Torchship is a working-class hard SF adventure. Our heroes are focused on trying to do their jobs hauling cargo between star systems. Because the richer worlds are paranoid about computer viruses and other hazards the freighter is a computerless “analog ship.” This makes it useful for missions outside civilized space. And for some reason nasty people keep showing up and trying to keep the crew from getting the job done.


4. We all need a hero! Tell us about your protagonist(s)? Was there a real-life inspiration behind him or her?

Michigan Long is a pilot, one good enough to wring fancy maneuvers out of a clumsy freighter. She also has a second job that keeps taking up her off time and getting her in trouble, but she’s keeping that a secret from her co-workers. The real-world inspiration is a former US Air Force co-worker with a petite frame and very large attitude.


5. A good villain is hard to write. How did you get in touch with your inner villain(s) to write this book. Was there a real-life inspiration for him/her/it?

Real-word villains tend to be people “just doing my job” or “trying to get by” or in the very worst cases, making sacrifices in the service of some grand higher goal. My villains are following their incentives toward some practical goal, rather than causing harm for its own sake. Of course, when you don’t know their goal it may look like pure harm.


6. What real-life inspirations did you draw from for the worldbuilding within your book?

Right now we have almost no laws about assisting in the spread of malware. If your PC is hijacked for a denial of service attack on some website you might not even notice. Even if you did you have no legal penalty for it. Imagine if that kind of carelessness in computer security was treated the way we treat heroin dealing today? That leads to a society with continual monitoring of network nodes, harsh penalties for people trying to hide computer mods from the monitors, and foreign computers being forbidden.


7. Sci-fi fans love techno-porn! What real-life science (or pseudo-science) did you research for your book?

I am a real-life “rocket scientist.” I’ve calculated orbits for satellites and ascent trajectories for launch vehicles. This includes experience operating military systems and developing new ones, plus a couple years at a commercial launch vehicle company, trying to break the trail SpaceX has followed. So when I write about the spaceship maneuvers in the book, including a chase through a ring system, I didn’t need to do research, I just ran the numbers.


8. What was the hardest part of writing this book?

Having the self-discipline to keep my butt on the couch and crank out words. Which is why the first draft was written in longhand. It was the best way to keep myself off the internet.


9. What was your favorite chapter (or part) to write and why?

To spoil a subplot—the wedding. That was written out of order, well before I wrote the last half of the book.


10. Did you learn anything from writing this book and what was it?

Outlines change. There was a one-line item on the original page-long outline that expanded to become a fifth of the book.


11. Is there a message in your novel that you hope readers will grasp?

This isn’t a message book. It’s entertainment. That said, I’ve tossed a bunch of different ideas into the story and I hope some people will find them worth discussing or stealing.

The sequel, Torchship Pilot will be out this summer. After that I have several projects. The third Torchship book is in the stage of write scene-throw it away-write another that doesn’t fit the plot-bang head against wall. When I’m blocked on that I’ve been working on a portal fantasy and an SF romance. Plus I’m making notes for another space opera series for when I’ve finished with the Torchship-verse. I’ve also written some short stories, one of which will be published in Cirsova magazine this year.


13. If you couldn't be an author, what would your ideal career be?

Building rocketships. Which I’ve done, but the company didn’t last and I have kids to take care of. These days I’m in the fighter plane business. I’d love to go back to rockets if I could.


14. What is your preferred method to have readers get in touch with or follow you (i.e., website, personal blog, Facebook page, here on Goodreads, etc.) and link(s)?

I post writing news at kelthavenpress.com, which is also mirrored on Goodreads and my Amazon author page. Commenting my site is a good way to reach me. If you want to see me in person I’ll be on panels at Soonercon (June, OKC, OK) and Fencon (September, DFW, TX).


15. Do you have anything specific that you want to say to the Space Opera Fans community members?

Thank you for giving a new author a chance!

Don't forget TORCHSHIP is one of our GROUP READS this month!

Great interview! Always good when someone can bend their real life experiences into something for science fiction.

Any art is improved by knowing a bit about the artist and what motivates and inspires them. We have a few paintings we've purchased over the years at local art shows; in each case, we met the artist. I find it helps me do enjoy looking at the pictures and finding new things in them over time.

Great interview! Made me curious about the book!
I really liked the approach for villians, the "I'm just doing my job" kind is terrible!