In case you were confused by that in the audiobook.

In the dead tree edition was it actually written "ASCII"? Follow-up question, as we learned in another thread km/h gets shortened in NASA lingo to kph. Is this something else that NASA does, or is it just the audio book narrator ad-libbing?

Well if the mission planning was done in Fortran IV no wonder he's stranded.

I've got a Fortran IV hooked up to my arm right now.

Um...someone help me out and make anything in this thread make sense. What is this ASC thing, and what is the significance of the differently written two?

Someone else can probably explain better. The atomic level of computing is binary. Switches are either on or off. ASCII is what converts binary to letters that you and I can understand. It's basically the digital alphabet. ASCII has been the standard as long as I can remember. If binary is the atom, ASCII is the molecule.

Oh, and it's never written as ASC2. It's always with the Roman numeral. I've also never heard it said aloud. I pronounce it in my head as ass-key.

Ah, I've heard 'askey' spoken before, but never known how it was written. Makes me wonder why it is said like that. Or written like that. But thanks for the info. :)

ASC is an abbreviation for something. Don't ask me what.

I had almost forgotten about ASCII art. I never had the skill for it.

I feel vindicated that the narrator on the video said ass-key.

I only knew how to say ASCII because of Cosima on Orphan Black.

Mod
I'm ashamed as a self-proclaimed computer geek to not have an ascii table on any of my devices (that I'm aware of). Maybe back when I was in college. 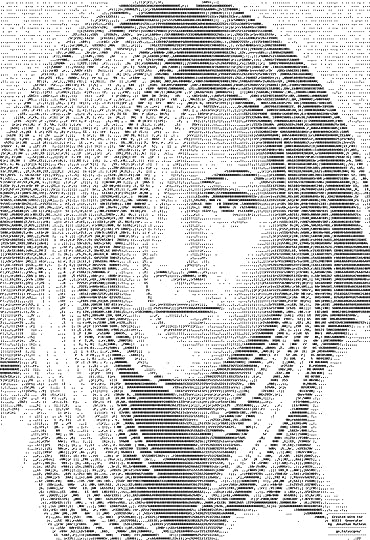 ASKII is a computer text language. It was in a table - the one you see on the net is the human version. The computer used it too in a sort of mechanical table stored in its memory to know what to show on the monitor, for instance the letter 'A' or as an instruction, like, add the number 6 to 2.

The computer was designed to use math as instructions on how to run itself because of the nature of the hardware (kind of like an electronic abacus, sort of) and because of the storing of memory issues - storing things in memory had to be compressed because the hardware to store was clunky and couldn't store very much. The designers had to make something that both ran the computer, like check out and use the hardware, and could put the pictures of the alphabet and pictures of numbers up on the screen so people can see what the computer is doing, while following 'simple' instructions to do stuff, like Save, Move, Copy.

People use A B C D to do things, etc. Computers add and subtract numbers to do the same thing. It's why everyone starts bringing up binary (2 system) or hex (8 system) or decimal (10 system).

People use decimal systems. 0-9 in the first column, 10 going to a second column, etc. Computers use binary math. 0 and 1 in the first column. In binary, 10 actually represents the number 2, or two things, not ten things. 15 is 1111. To a computer, 1111 might mean the number 15 in decimal, or location 15 in memory or the letter N ( can't remember actual number for N - also, n is a different number too)

You can google it to see the tables, but honestly I didn't see a good description of what it all means. You'd have to take a class or get a book on computers, a beginners book which describes how computers work.

I think the Wikipedia article isn't a bad place to start:

I didn't want to overwhelm....

When I was an assistant in a computer lab, and floppies were in use, the instruction, "insert second floppy" came up on the screen of a student. She did. She called me over and said something stopped. Checking the computer, I saw she had crammed both floppies into the drive. She said, "it didn't say to take out the first one." She was right, of course.

It's scary how frequently as a programmer I need to lay my hands on an ASCII table! (American Standard Code for Information Interchange incase people don't want to look it up).

aPriL meows 'n growls graphomanically wrote: "People use A B C D to do things, etc. Computers add and subtract numbers to do the same thing. It's why everyone starts bringing up binary (2 system) or hex (8 system) or decimal (10 system). "

Technically 8 system would be Octal, hex is base 16.