Our group read is now open.

If you need to talk about any major plot points (minor story details don't need to be tagged), please use this code to put your text inside of a spoiler tag and make a note of whereabouts in the book you're talking about so people know if they've read far enough to be able to click on the tag :

I love how the possible side effects of a super volcano were thoroughly researched in this so the details of the events are actually possible.

Finished yesterday! A good read that had me pondering a lot about my survival prospects if a super volcano actually erupted. Now I'm appreciating ski shoes, paved roads, greenhouses, and pre-planned meeting places like never before! Also, what kind of person would I be like when suddenly we're all fighting for strained resources? Makes you think about the relationship between food insecurity and violence – not exactly fiction but an overlooked reality by those living comfortably.

I finished the other day also. I liked the book, it was a simple read but invoked deeper thought. I like post apocalyptic books but often they seem too far from reality. The actual research about how a super volcano might affect the world, and the people in it, made this more realistic. I think the reason I like these types of books is because I too wonder how I would be able to survive in the situation. ( I have come to the conclusion that I'd be a gonner for sure)

I lost power for 5 days 2 years ago. It was during the summer so I didn't really have to worry about light and it was easy to go some place else and charge my phone. And I thought the fact that my water still worked was amazing! After growing up in the country, I associated lack of power with lack of water because of the electric pump.

Fifty pages into Ashfall and now all of those things sound like a luxury. Some how this book is making me want to get prepared for the possibility of something happening even more than an actual event did. I think its the realization that what seemed like a major event was really only a minor inconvenience.

Diane wrote: "I love how the possible side effects of a super volcano were thoroughly researched in this so the details of the events are actually possible."

Diane, I loved how this book included a bibliography and author's note on volcanoes. It makes me so happy when authors do their research.

I just finished this book today and really liked it. It reminded me of other cli-fi I've read like

, but this one actually got the protagonist out in the world while those had people holed up while the disaster raged around them. It was definitely a different perspective than we usually get from YA books on this theme.

Working in a library, I loved that the librarian in the town still had the library open which was awesome. I think I would have to hole up in a library somewhere if something like this happened just to make sure I have plenty to read :-).

Like everyone else I definitely am thinking about how to survive such a disaster. I feel woefully unprepared food and water-wise and don't know how well I could handle a 140-mile trip in ash and snow.

i need to try and get this, but my library catalog has been down the last week while they upgrade it, so couldn't look to see which library had it - everythign should be running normally again tomorrow, so I can try to find it

I love this series. I have to finish the last one still, but I love the scientific aspect.

My library just got

in this morning! I have checked them both out. I had recommended them for purchase when this was first selected, so finally!

I only read the first but am curious about the next two. As always so much to read ... so little time.

The book is amazing and unbelievable in the fact that it is believable. I don't want to think that the world can fall apart that quickly but just this winter one snow storm stopped things for a day or two and the grocery stores were empty. I also don't want to believe the situation in the FEMA camp would be like that but they currently don't have a great track record.

The FEMA camp disturbed me the most I think. Natural disasters can happen but that is a human disaster.

Not even have way through this book but had to pop in because I got excited Ashfall Park in Nebraska was mentioned! I never get to relate to those kind of things in books! Had to geek out and remember going there as a kid. 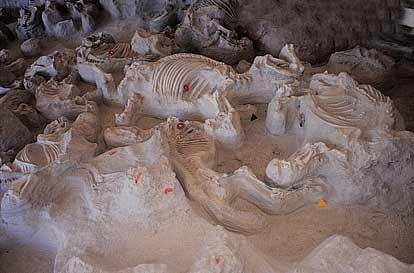 Anyways the book started off a bit slow for me. The telling of the things, did this, did this, still dark, still loud was a bit to wade through. But once Alex got traveling I started to enjoy it more. And the whole possibility that this could happen makes it more interesting to read. I watch the strangest things with my dad and have seen a show or two about volcanoes and how yellowstone would pretty much end the world! I'll have to check out the author's notes later!

I just finished the whole trilogy! Overall, I enjoyed it. It was definitely scary, since I can imagine this happening!

was good. I thought the author did great at describing the eruption and the aftermath. I was annoyed by how often food was mentioned, even though starvation was a major threat in this new world. But what made it so annoying was that Alex didn't think seriously about rationing his food. He'd just eat whenever and then as an afterthought realize that he's probably going to run out. Not very smart.

bored me. I felt it was the same plot as the first book, except in reverse. I liked the ending though.

was good! I loved watching society crumble and rebuild! Lots of interesting stuff there! And I got all teary eyed when (view spoiler)[Ben grew a plot of flowers for Rebecca. (hide spoiler)] That was too cute! I hated Alex's mom though. I kind of wanted Darla to punch her in the face.

Thanks for everyone's participation!

Moving this over to the appropriate folder to make room for the new group read. :)