Hi -
I don't know if I should post this question here, but I'm looking for the word (verb) used to describe the ember of cigarette that gets too hot and burns the cigarette faster. I can't remember what causes it - taking too deep a drag? Taking too many drags in too short a time span?
I haven't smoked in ages, but I remember in high school sharing cigarettes and folks getting pissed off when this happened.
I'm sure we had a word for it.
Anybody got a clue?
Thanks

Mod
Non-smoker here. All I can think of is "toke," but that's an ember of a different color.

Toke is a good word, though. Nice and tidy.

Mod
Yeah. In writing, there's nothing like a one-syllable mot juste.

Mod
Toke is a long drag (ex-smoker here). No idea what the ember is called.....

Mod
I think Sarah means the long draw or pull on the 'rette which creates the ember. Verb. Tough one. But I love challenges like this (keep 'em coming... I'll create an "I'm Looking for the Word for..." thread).

Yes, I think there's a word for what the hot ember is doing. Thanks for thinking about it.
And I'd love a "looking for the word for" thread.
cheers

Mod
Actually, this IS a "looking of the word for" thread because it's called "What's the word for...."

This will make do.

You mean when someone "hotboxes" the cigarette until the "cherry" (ember) glows red hot and the filter is so hot you can't put your lips on it to inhale again or share?

Mod
Wow. That sounds rather authoratative, Meridee. Finally, a place where smokers are welcome and need not puff out on the sidewalk in the cold!

Just an old ex-smoker (quit about 30 years ago) and my husband just quit after approximately 55 years of smoking. He taught me all the lingo. But, yeah, smoke 'em if you got 'em.

I've never heard those words but, yes, that's exactly what I mean. Wonderful.
thanks, meridee.
sarah

I need a word for the thingee on the back of a man's necktie that one passes the short end through to keep it from flapping around.

In cheaper ties it's usually just the label but more expensive ties often have a label and a thingee.

Even the lowly shoe lace has the word aiglet for the sheath at the end.


Anyone have a word for it? And if there isn't one... perhaps we should make one up. Perhaps it should rhyme with orange. Might as well clear up two problems with English at the same time.

Mod
When you find out, keep me in the loop.

All I could find was something called a keeper.Here is the link.

I should change my name to the digger.

Hee hee So we are keepers.

Glad to see that my confusion served some purpose Gabi!

Serious thanks to Kitty for her contribution I've been checking out hard copy dictionaries that label things for years and have never found a necktie in one.

Never there was brass on the end of shoelaces, know only the clear ones that look like cellophane. What are sandshoes, Gabi, are they like sneakers, white? 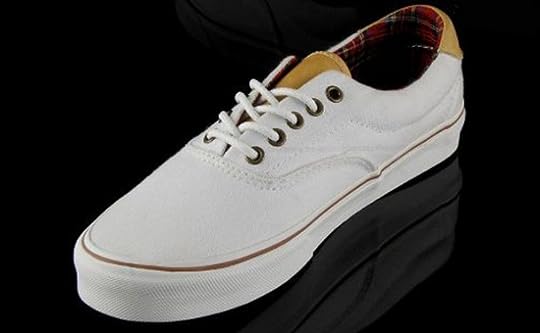 That's what I thought. Thanks Debbie.

Mod
They look like what we call "deck shoes."

Ruth wrote: "They look like what we call "deck shoes.""

That's what we called em as well. We differentiated between these and the white soled mocassin style boat shoes that called topsiders (which I guess are really a brand name)

I was thinking of the Keds brand, but when Gabi said sandshoes that Is what I immediately thought of.

What is the word you use for flip flops or what we in Hawaii call slippers?

I've worn out many a pair of Topsiders. They used to be great shoes. Now they're made in China.

Mod
Can't say thongs anymore because that's the word for "butt floss," a.k.a. what many young women call "underwear" these days.

Flip-flops it is, then.

Mod
Thing a thong of thixpence...

Mod
What's wrong with jandals (an amalgam of Japanese sandals by the way).

Skimpy underwear has been around since the days of Bach, when he wrote "Air on the G String."

I remember them being called "go-aheads" growing up in Calif.
I think it was because it was hard to go backwards in them.... :-)

I think it's like 'torn shed' as pronounced in the Chinese way..without the final consonants!

Mod
The meaning is not important....perhaps you meant 'pronounced taw as in paw, or more'.....what was needed was a rhyme, not a synonym.

Stephen, I just read your question in #15, about ties. The only thing that comes to my mind is a tie tack, which you punch through the tie and shirt to keep the tie from flopping around. Some of them punch through the tie but attach to the shirt with a chain. I always had cheap ties, made by Yves Saint Laurent or Ralph Lauren or Robert Talbott. They all use the label on the back to hold the tail.

M wrote: "Stephen, I just read your question in #15, about ties. The only thing that comes to my mind is a tie tack,..."

Thanks but I think that the "keeper" that was mentioned by Kitty in post 18 is the best answer so far. It fits the bill.


BTW... Gabi the word for THAT noise is a rimshot and in the States it's spelled ba dum dum!

Mod
I'm game if you are Gabs! What can we get them to advertise!

Why not start a new thread and see what happens?

Mod
My google ads have disappeared!!!!

Mine also now it is only books