89 views
Horrorpedia > What is your niche in the zombie apocalypse?

It's the zombie apocalypse - all hands on deck and humanity's innovative, indomitable nature must shine. What skills do you bring to the wobbly table?

Forethought.
I hope to have a garage and a car.

Seriously, a lot of people fantasize about it, and it's kind of moved from the horror genre to the more action-adventure genre, but when it comes down to it, the best way to deal with an actual zombie apocalypse is carbon monoxide.
The alternative is all the hell of war and the collapse of civilization only worse and with no foreseeable end.
Note that most (worthwhile) zombie apocalypse stories do not end happily.

That is dark! No adolescent power fantasy for you, huh?

Nah.
For one thing, since I've grown older, I can't quite get into that mind frame where I think death all around me is empowering.
If I must read about zombies, I prefer the darker, more honest stuff, where it's all about suffering and bleak, and all immature fantasies about zombie-slaying end in pissing oneself and rolling into the fetal position, while those forced to do the killing find it to be torturous or become monsters learning to adjust to it.

Zombies are metaphoric in the same way as the Four Horsemen. War, Famine, Pestilence, and Death.
Unless you're doing parody, these are the darkest things humans face, and they break us down, traumatize us, and leave us scarred if they don't destroy us.
The fact that there are people fantasizing about it just goes to show that zombie writers are failing to get the point across.
Or maybe zombies are doomed to become cuddly like vampires and werewolves. Ugh.

I can shoot and I love edged weapons. I'm a professional logistics guy, and I love picking up odd survival tips and tricks. I've been shot at and chased by crowds armed with machetes (with me unarmed), so I know I don't go fetal in the face of danger.

Really, a mob of head hunting rioters is not all that different from zombies except they don't bite as much. On the other hand, they're smarter and tend to light fires.

A zombie apocalypse is not empowering. It would be a pain in the a*** (British spelling) but I'm not about to ring the dinner bell and lie down on a platter with an apple in my mouth either.

It's the slow motion zombies that are encouraging idiots to fantasise about it. It looks so easy to avoid them.

I'd much prefer one of those plagues that kills everyone except a select few (me included I hope) like Day of the Triffids or Survivors. Much more fun.

A cool head. I may not have all the answers, but I can remain calm and hopefully help others do so while searching for the right answer. Afterwards, I shoot first and ask questions later.

If the stinky stuff hits the rotating blades (as I know it will) and I decide I have no choice, I have no problem going out singing this song: 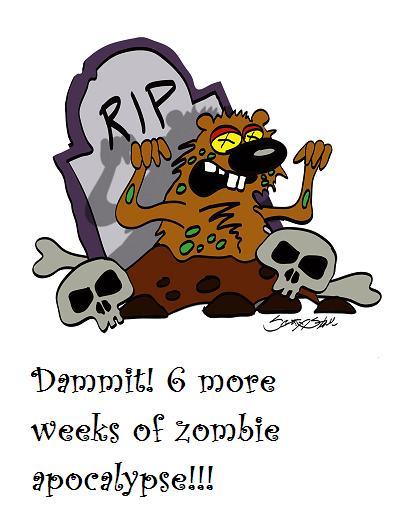 I don't think I have many skills but you never know what people are capable of if they need to survive so maybe I would surprise myself. I guess the alternative would to be a zombie which wouldn't be to good.

Hmm… this is a great topic.

I do have training in several martial arts along with reasonable amounts of practical knowledge. I have also watched and read about a billion zombie movies and books.

Sadly, I live in Australia, and I have a feeling that our lack of firearms may come back to bite us (literally) if there ever is a zombie apocalypse.

I would be dead. Then undead.

I posted a comment earlier that was meant for another forum. Sorry.

I'm a good organizer, and am a good team leader. I would like to think that I would lead, or jointly lead, my team. But I'm also smart enough to know that I'm not a weapon expert or survivalist, so I'd listen to the advice of those smarter than me on certain subjects.

I would die after a month of running out of my thyroid medication, then I would be a zombie.

I shall bring not a damn thing lol sorry but if you aint family or friends you on your own XD naw seriously though, i'd bring knowledge of zombies and an ability to help formulate plans haha

Love this. Ok. I think fast, don't panic. I am a problem solver and don't like to give up until its over. Have a lot of compassion. I know for sure I would fight until the end.

Veronica wrote: "Love this. Ok. I think fast, don't panic. I am a problem solver and don't like to give up until its over. Have a lot of compassion. I know for sure I would fight until the end."

I saw this and automatically thought, oh hell im gonna be the one to get you killed by screaming we're all gonna die what do we do what do we do" sorry had to share that :) hana

uhm; i tend to stay calm under pressure...very calm. ability to assess a bad situation and get the hell out of there.

i am one of those old military folks that believes in 'no man left behind'; but i know how to cut my losses.

i also know how to walk 'quietly' and i am not afraid of the dark. (the cat loves me for this!!)

I tend to be a loner anyway; but i can work well in groups as long as they don't piss me off....

Is this Night of the Living Dead where all dead people become zombies or like every rip-off of it, where only those infected become zombies.

If it's the former, I may have a moral obligation to see that my garage is sealed up before starting the car. That way I can't get out and be one more zombie to worry about. I figure being a zombie means not really having any human feelings, so this is better than trying to set up the garage to burn... in which case it might burn before I die in a nicer way.

Of course if it's Return of the Living Dead, zombies have feelings (per Part 3) and are ridiculous and virtually impossible to destroy or avoid infection from (per all of them) and really then the best thing to do is call the military to send the nukes before it spreads to far.

Remaining undetected. You'd be surprised at just how much you can get away with if nobody is paying attention.

I figure if anyone else needed the skills I have learned, they should have taken the time to learn them.

Agreed @ remaining undectected. Although in the event I encounter the living dead I am aiming for the head to be done with it.

Aim with a tomahawk. They never run out of ammunition.

Courtney wrote: "It's the zombie apocalypse - all hands on deck and humanity's innovative, indomitable nature must shine. What skills do you bring to the wobbly table?"

I pretty much have no skills that would help during a zombie apocalypse. I can't run worth crap, can't shoot anything, can't use a knife, can't grow much food. Doesn't look good in my favor!

Erin, it looks like you've drawn the job as night watchman.

Love this question... I can outrun them all, just give me an open space, and I'll run 26.2 miles, roundtrip, and bring back supplies. "Victory!" I will declare upon my return, and then die on the spot.