Book 1 in The Titan Series

The Fates are cackling their bony asses off…

It’s been a year since Seth made the deal with the gods that pledged his life to them. And so far, the jobs they’ve given him have been violent and bloody–which is kind of all right with him. But now Apollo has something else in mind for Seth. He’s got to play protector while keeping his hands and fingers off, and for someone who really has a problem with restraint, this new assignment might be the most challenging yet.

Josie has no idea what this crazy hot guy’s deal might be, but it’s a good bet that his arrival means the new life she started after leaving home is about to be thrown into an Olympian-sized blender turned up to puree. Either Josie is going insane or a nightmare straight out of ancient myth is gunning for her.

But it might be the unlikely attraction simmering between her and the golden-eyed, secret-keeping Seth that may prove to be the most dangerous thing of all.

Because history has once again been flipped to repeat. 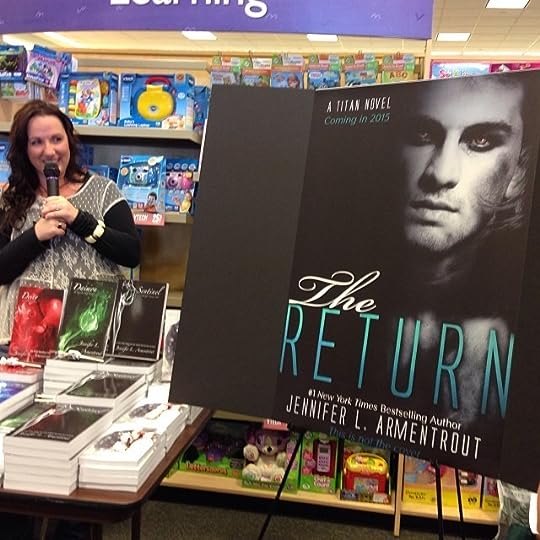 I'm a tad disappointed coz that cover ROCKS

it’s a cool cover! but maybe the cover they’re going to use will be based on that picture as well?? haha. so excited! so many books to look forward to. :)

I imagine Seth to have more of a boyish face, but the cover fits.

Hi!
I LOVE Seth! I never thought I'd love Seth as much as I do! Of course, I love Aiden also, but..I LOVE Seth!

I am SO beyond happy to have more of Seth, and..I'm gonna keep my fingers crossed that we'll be able to see..other people again..:)

Mod
So I never thought I would say it but the impossible has happened... I LOVE SETH!
The Return is utter perfection. I loved every moment of it and Josie is just perfect for him, so much love and I bow down to Jen. I don't know what she has done to me to make me love Seth but she is amazing!

Yay! I love Seth from the beginning! I will probably read my copy of The Return next month! Hopefully!

It's bad when you are a newbie and contemplating becoming a book blogger just to get an ARC because you miss reading about Seth .. Especially when last year I didn't even know what an ARC was but JLA is the only writer who can make me laugh out loud , even shed a tear in one book plus super action scenes and swoon worthy lead men. I also really liked Apollo so happy to hear he will be on the Titan series. Just patiently waiting already read covenant series twice. 2015 tic TOC Tic

I'm excited to read The Return :) any1 else out there

I'm currently rereading Covenant, because I want to fully enjoy The Return:)

Awesome! I read the series for the first time a couple months ago and I already want to re read it.... Maybe after The Return ;D.

have you guys read dark elements or wicked yet?

Yes I've read both series and loved them both of course ;D. Ugh I really want Every Last Breath and Torn!!!

Last time I saw the German version of White Hot Kiss and ugh - they changed Roth's name to Ash.

What!! That makes no sense he is and will always be ROTH!!! Ash just doesn't fit his personality.

Tots^^ especially because Ash has nothing to do with his real name.
Also, Half Blood was changed into 'Demon daughter - forbidden kiss'. I think that's even worse than Ash.

Ok that's weird. I love The titles of her books and her character names. There's no need to change anything. They're amazing how she left them!!

Of course they are:) German translators just seem to love messing with them.

So I read it .. Finished today and I do love JLA but looking forward to book 2 probably a little more than book 1 because there was a lot of back story that had to be repeated but I am a covenant series fan so it's all good and I enjoyed visiting again with some of my favorite characters like Apollo and Deacon and a few others and JLA's humor to me is always the best . I like the new characters too and I like Josie . Actually want to know more about the Titans can't wait for book 2. Loving St Seth

did anyone preorder this book? =)

Nope, but I hope I'll get my hands on it within the week:)

I liked it but not as much as covenant... I wish there would've been more appearances from the gods and titans but maybe that will happen more in the second book.

did you receive the bonus scene??

Yes me too would have liked to seen more Titans . As for bonus scene good question I thought I was going to get a bonus scene but didn't JLAs blog said something to that but when I got the book there was no bonus chapter

I preordered the book and filled out the form. As promised I received a bonus scene.

[Spoiler]It's a nice scene with Alex and Aiden, but it's nothing new. I was a little disappointed 'cause it only told the ending of Sentinels from Aiden's point of view, but as I said, it was nice reminiscing. [end spoiler]

I really loved the book, Seth's point of view and I really liked Josie. I thought, after Alex, how can you write another strong and fascinating character with the same guy and make her not another Alex. But I think Josie is similar, but also a whole kind of different. I can't wait to read the next book. It's a pity that there isn't even a release date. Is it even written?

I finally started the book=)
Is it just me or does Seth miss some of his ... Sethness without Alex?

Yeah he was missing some of his Sethness... I thought it was because the book was NA so he was going to act a bit different but it was probably the lacking of Alex.

I actually think we see the real Seth now ...

Oh and I'm loving that this group is active ... It's nice to read everyone's comments

Same here! It's great to talk to other JLA obsessed readers like myself!!! I'm making my way through all her books and have never been disappointed!! Can't believe it took me this long to find her!! Reading Lux for the first time and loving it!!!!!

Ooooh Lux. I read it right after Covenant. How do u like it? It is one of my fav books, although I'm not really into the Alien stuff. But the series is just awesome-est!! Because, seriously. Daemon.

Aaand what I meant is, I liked Seth's relationship with Alex a lot, so it takes some time, you know... getting used to Josie. She's nice and all, but after Covenant I kind of miss Alex^^

Miss Alex too *frown*... Maybe she'll make an appearance in book 2... Yeah Lux is amazing and I almost didn't read it because of the alien thing but I'm so glad I did!!! I'm almost halfway through Origin and i don't want them to end!!!

No spoilers, I'm not far into the book;)
Woah so you're nearly done! Wait for opposition, it is a brilliant conclusion! Have u read The Dark Elements too?

Oh yes love The Dark Elements!! White Hot Kiss was actually the first book I read of hers. I really want Every Last Breath!!! Have you read Obsession yet?

I know, right? Can't wait for it:)
Joup, I did. It wasn't as good as the Lux Series, but it was pretty cool, getting to know the other side and I absolutely loved the scene where Hunter met Daemon. If you haven't read it yet, you should do so before you start Opposition;)

I didn't know that. Gonna have to buy Obsession next then.

It's not necessary, of course, but Opposition is more fun if you do so;)

Whoop, I´ve just finished the book! Anyone else thinking Deacon is the most adorable person ever?

Love it! I'm almost done and then I'll start obsession. Really excited to learn more about Hunter! Did you enjoy The Return?

The Return (other topics)