Title: I Have No Mouth and I Must Scream
Author: Harlan Ellison

//SLIGHT SPOILERS//
(nothing too intense, but I don't want anyone to get rustled)

One evening, I decided that I hadn't read nearly enough horrifying things in my life. From that one thought until the evening drew to a close, I scoured the internet for gems of terror, short little tidbits that I hadn't already found and perused rather thoroughly. My "favorite" finds from that evening were "To Serve Man", "Guts", and this.

Some of you may know that there is a game created from this short story as well that further expands on the individual stories of each character. Some might even know that the main antagonist of this story is voiced by Harlan himself in the video game. All that have played aforementioned video game, though, are well aware that it is rather difficult to deal with, especially for those not all that well-versed with "old-time RPGs".

"I Have No Mouth" is the tale of a handful of "survivors" living on post-apocalyptic, post-Cold War Earth, though we cannot assume it is any form of Earth that we ourselves know. They are lorded over by a monstrous super-computer that has rebelled against its creators and delved into the complete hatred of humanity. This hatred manifests itself with its dealings with the "survivors", though they (quite understandably) long for death. Each person has their own little quirks, so to say, a reason why the super-computer has spared them only to make them suffer more.

Truly, though, I recommend this as well as the game. You'd have to experience both to fully understand what exactly is going on.

Mod
Thanks Bianca. This has been on my TBR for ages. I got halfway through Deathbird Stories and was loving it until I hit a dull patch. Then I put it down and haven't picked it back up again. I'll have to have a read of this when I get through the Group Read book, though..

Mod
This is one of my all time favorite short stories. I probably first read it when I was around 13, making it that much more intense. I haven't played the game.

Here is a picture from my entry in last year's Seattle Edible Book Festival, "I Have No Mouth and I'm Ice Cream: 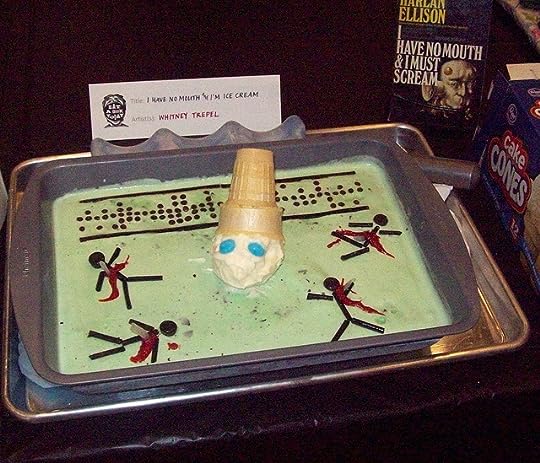 It was a little disappointing that no one I met there had read it, although a few had heard of it and a few more said that now they were going to read it, so I count that as a victory.

@Ruby: Glad you're considering reading it!

@Whitney: That is an incredible piece. I'm sitting here laughing because it's perfect! And that pun! Please tell me that you won some kind of prize for that!

Thanks for bringing this up Bianca, you made a great case! I had never heard of it and will now hunt it down to read it immediatly.

Not need to hunt it down, the highlight in the beginning is a link to the actual story... how dumb can I be. >.>

This was one of the first short stories that deeply affected me as a child, way back in the early sixties.

Mod
Thanks for the appreciation of my culinary creation - it's gratifying to finally show it to people who get it!

It's funny, quite a few of us love that story, but it's a hard one to get a discussion going on. Why is that? Is it because it's so complete and perfect in itself?

Mod
I promise I'll get to this one, just as soon as I finish The Pale King...

Mod
Ruby wrote: "I promise I'll get to this one, just as soon as I finish The Pale King...

It's a pretty quick read, you could read it when you need a break from DFW. As a bonus, it has NO footnotes.

Mod
Hehe. Nice thought, but I'm gonna be lucky to finish DFW in time for the group read as is. No time for breaks!

I am a major fan of Harlan Ellison and "I have no mouth" is a great story. Also "Repent, Harlequin!" Said the Ticktockman is another good one.

Oh god, you would mention that game. The woman spent a tortuous evening trying to use DOS to get it to run, so she could show it to me, and then we couldn't get more than a screen or two in.

Amazing story though. Always a favorite.

Mod
Nicolas wrote: "Oh god, you would mention that game. The woman spent a tortuous evening trying to use DOS to get it to run, so she could show it to me, and then we couldn't get more than a screen or two in..."

"The woman"? Who is this woman?

Ah, sorry Ruby. My wife. I don't know how we picked up the habit of referring to each other mainly as "the woman" and "the man" around others. It must sound strange.

Mod
Oooh. This story would score points in the CR Treasure Hunt because it has more than 7 words in the title. Just sayin..

Mod
Ruby wrote: "Oooh. This story would score points in the CR Treasure Hunt because it has more than 7 words in the title. Just sayin.."

Waaaait a minute - a short story? Wouldn't you have to read the collection of which this is the titular story to score it? You start allowing short stories, and, well, chaos!

Mod
Whitney wrote: "Ruby wrote: "Oooh. This story would score points in the CR Treasure Hunt because it has more than 7 words in the title. Just sayin.."

Waaaait a minute - a short story? Wouldn't you have to read th..."

Hunh. I thought you'd scored a short story, but I must've dreamed that bit up. Okay - fair enough.

THAT ICE CREAM PICTURE IS BRILLIANT! It made my heart sing.