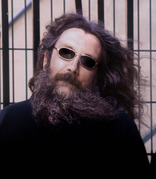 “There is some confusion as to what magic actually is. I think this can be cleared up if you just look at the very earliest descriptions of magic. Magic in its earliest form is often referred to as “the art”. I believe this is completely literal. I believe that magic is art and that art, whether it be writing, music, sculpture, or any other form is literally magic. Art is, like magic, the science of manipulating symbols, words, or images, to achieve changes in consciousness. The very language about magic seems to be talking as much about writing or art as it is about supernatural events. A grimmoir for example, the book of spells is simply a fancy way of saying grammar. Indeed, to cast a spell, is simply to spell, to manipulate words, to change people's consciousness. And I believe that this is why an artist or writer is the closest thing in the contemporary world that you are likely to see to a Shaman.

I believe that all culture must have arisen from cult. Originally, all of the faucets of our culture, whether they be in the arts or sciences were the province of the Shaman. The fact that in present times, this magical power has degenerated to the level of cheap entertainment and manipulation, is, I think a tragedy. At the moment the people who are using Shamanism and magic to shape our culture are advertisers. Rather than try to wake people up, their Shamanism is used as an opiate to tranquilize people, to make people more manipulable. Their magic box of television, and by their magic words, their jingles can cause everyone in the country to be thinking the same words and have the same banal thoughts all at exactly the same moment.

In all of magic there is an incredibly large linguistic component. The Bardic tradition of magic would place a bard as being much higher and more fearsome than a magician. A magician might curse you. That might make your hands lay funny or you might have a child born with a club foot. If a Bard were to place not a curse upon you, but a satire, then that could destroy you. If it was a clever satire, it might not just destroy you in the eyes of your associates; it would destroy you in the eyes of your family. It would destroy you in your own eyes. And if it was a finely worded and clever satire that might survive and be remembered for decades, even centuries. Then years after you were dead people still might be reading it and laughing at you and your wretchedness and your absurdity. Writers and people who had command of words were respected and feared as people who manipulated magic. In latter times I think that artists and writers have allowed themselves to be sold down the river. They have accepted the prevailing belief that art and writing are merely forms of entertainment. They’re not seen as transformative forces that can change a human being; that can change a society. They are seen as simple entertainment; things with which we can fill 20 minutes, half an hour, while we’re waiting to die. It’s not the job of the artist to give the audience what the audience wants. If the audience knew what they needed, then they wouldn’t be the audience. They would be the artists. It is the job of artists to give the audience what they need.”