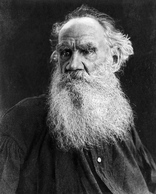 “Having then for the first time clearly understood that before every man, and before himself, there lay only suffering, death, and eternal oblivion, he had concluded that to live under such conditions was impossible; that one must either explain life to oneself so that it does not seem to be an evil mockery by some sort of devil, or one must shoot oneself.

But he had done neither the one nor the other, yet he continued to live, think, and feel, had even at that very time got married, experienced many joys, and been happy whenever he was not thinking of the meaning of his life.

What did that show? It showed that he had lived well, but thought badly.”

31 likes
All Members Who Liked This Quote