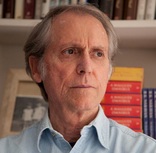 “Within sixty-minute limits or one-hundred-yard limits or the limits of a game board, we can look for perfect moments or perfect structures. In my fiction I think this search sometimes turns out to be a cruel delusion.

No optimism, no pessimism. No homesickness for lost values or for the way fiction used to be written.

Everybody seems to know everything. Subjects surface and are totally exhausted in a matter of days or weeks, totally played out by the publishing industry and the broadcast industry. Nothing is too arcane to escape the treatment, the process. Making things difficult for the reader is less an attack on the reader than it is on the age and its facile knowledge-market.

The writer is the person who stands outside society, independent of affiliation and independent of influence. The writer is the man or woman who automatically takes a stance against his or her government. There are so many temptations for American writers to become part of the system and part of the structure that now, more than ever, we have to resist. American writers ought to stand and live in the margins, and be more dangerous. Writers in repressive societies are considered dangerous. That’s why so many of them are in jail.

I see contemporary violence as a kind of sardonic response to the promise of consumer fulfillment in America... I see this desperation against the backdrop of brightly colored packages and products and consumer happiness and every promise that American life makes day by day and minute by minute everywhere we go.

Discarded pages mark the physical dimensions of a writer’s labor.

Film allows us to examine ourselves in ways earlier societies could not—examine ourselves, imitate ourselves, extend ourselves, reshape our reality. It permeates our lives, this double vision, and also detaches us, turns some of us into actors doing walk-throughs.

Every new novel stretches the term of the contract—let me live long enough to do one more book.

You become a serious novelist by living long enough.”