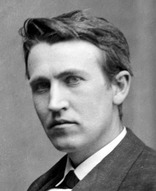 “...What I have denied and what my reason compels me to deny, is the existence of a Being throned above us as a god, directing our mundane affairs in detail, regarding us as individuals, punishing us, rewarding us as human judges might.

When the churches learn to take this rational view of things, when they become true schools of ethics and stop teaching fables, they will be more effective than they are to-day... If they would turn all that ability to teaching this one thing – the fact that honesty is best, that selfishness and lies of any sort must surely fail to produce happiness – they would accomplish actual things. Religious faiths and creeds have greatly hampered our development. They have absorbed and wasted some fine intellects. That creeds are getting to be less and less important to the average mind with every passing year is a good sign, I think, although I do not wish to talk about what is commonly called theology.

The criticisms which have been hurled at me have not worried me. A man cannot control his beliefs. If he is honest in his frank expression of them, that is all that can in justice be required of him. Professor Thomson and a thousand others do not in the least agree with me. His criticism of me, as I read it, charged that because I doubted the soul’s immortality, or ‘personality,’ as he called it, my mind must be abnormal, ‘pathological,’ in other, words, diseased... I try to say exactly what I honestly believe to be the truth, and more than that no man can do. I honestly believe that creedists have built up a mighty structure of inaccuracy, based, curiously, on those fundamental truths which I, with every honest man, must not alone admit but earnestly acclaim.

I have been working on the same lines for many years. I have tried to go as far as possible toward the bottom of each subject I have studied. I have not reached my conclusions through study of traditions; I have reached them through the study of hard fact. I cannot see that unproved theories or sentiment should be permitted to have influence in the building of conviction upon matters so important. Science proves its theories or it rejects them. I have never seen the slightest scientific proof of the religious theories of heaven and hell, of future life for individuals, or of a personal God. I earnestly believe that I am right; I cannot help believing as I do... I cannot accept as final any theory which is not provable. The theories of the theologians cannot be proved. Proof, proof! That is what I always have been after; that is what my mind requires before it can accept a theory as fact. Some things are provable, some things disprovable, some things are doubtful. All the problems which perplex us, now, will, soon or late, be solved, and solved beyond a question through scientific investigation. The thing which most impresses me about theology is that it does not seem to be investigating. It seems to be asserting, merely, without actual study.

...Moral teaching is the thing we need most in this world, and many of these men could be great moral teachers if they would but give their whole time to it, and to scientific search for the rock-bottom truth, instead of wasting it upon expounding theories of theology which are not in the first place firmly based. What we need is search for fundamentals, not reiteration of traditions born in days when men knew even less than we do now.

184 likes
All Members Who Liked This Quote