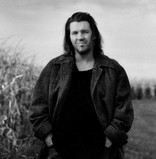 “To me, at least in retrospect, the really interesting question is why dullness proves to be such a powerful impediment to attention. Why we recoil from the dull. Maybe it’s because dullness is intrinsically painful; maybe that’s where phrases like ‘deadly dull’ or ‘excruciatingly dull’ come from. But there might be more to it. Maybe dullness is associated with psychic pain because something that’s dull or opaque fails to provide enough stimulation to distract people from some other, deeper type of pain that is always there, if only in an ambient, low-level way, and which most of us spend nearly all our time and energy trying to distract ourselves from feeling, or at least from feeling directly or with our full attention. Admittedly, the whole thing’s pretty confusing, and hard to talk about abstractly…but surely something must lie behind not just Muzak in dull or tedious places any more but now also actual TV in waiting rooms, supermarkets’ checkouts, airport gates, SUVs’ backseats. Walkman, iPods, BlackBerries, cell phones that attach to your head. This terror of silence with nothing diverting to do. I can’t think anyone really believes that today’s so-called ‘information society’ is just about information. Everyone knows it’s about something else, way down.”

208 likes
All Members Who Liked This Quote