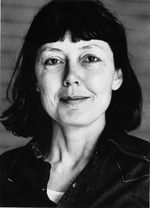 “I used to think when I was younger and writing that each idea had a certain shape and when I started to study Greek and I found the word morphe it was for me just the right word for that, unlike the word shape in English which falls a bit short morphe in greek means the sort of plastic contours that an idea has inside your all your senses when you grasp it the first moment and it always seemed to me that a work should play out that same contour in its form. So I can’t start writing something down til I get a sense of that, that morphe. And then it unfolds, I wouldn’t say naturally, but it unfolds gropingly by keeping only to the contours of that form whatever it is.”