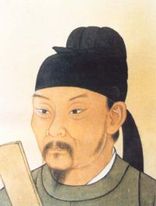 “Wagons rattling and banging,
horses neighing and snorting,
conscripts marching, each with bow and arrows at his hip,
fathers and mothers, wives and children, running to see them off--
so much dust kicked up you can't see Xian-yang Bridge!
And the families pulling at their clothes, stamping feet in anger,
blocking the way and weeping--
ah, the sound of their wailing rises straight up to assault heaven.
And a passerby asks, "What's going on?"
The soldier says simply, "This happens all the time.
From age fifteen some are sent to guard the north,
and even at forty some work the army farms in the west.
When they leave home, the village headman has to wrap their turbans for them;
when they come back, white-haired, they're still guarding the frontier.
The frontier posts run with blood enough to fill an ocean,
and the war-loving Emperor's dreams of conquest have still not ended.”