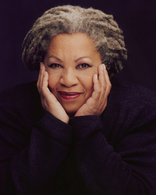 “All of that art-for-art’s-sake stuff is BS,” she declares. “What are these people talking about? Are you really telling me that Shakespeare and Aeschylus weren’t writing about kings? All good art is political! There is none that isn’t. And the ones that try hard not to be political are political by saying, ‘We love the status quo.’ We’ve just dirtied the word ‘politics,’ made it sound like it’s unpatriotic or something.” Morrison laughs derisively. “That all started in the period of state art, when you had the communists and fascists running around doing this poster stuff, and the reaction was ‘No, no, no; there’s only aesthetics.’ My point is that is has to be both: beautiful and political at the same time. I’m not interested in art that is not in the world. And it’s not just the narrative, it’s not just the story; it’s the language and the structure and what’s going on behind it. Anybody can make up a story.”

71 likes
All Members Who Liked This Quote