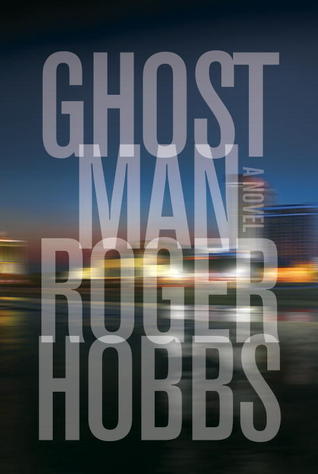 What makes a book "unputdownable"? As a student of literary theory at Reed College, Roger Hobbs set out to understand that question—a shrewd undertaking, since he was writing a book of his own. Known for wearing a suit to class, the sharply dressed undergraduate perfected his manuscript during his senior year and found an agent soon after graduation. Two years later Hobbs is publishing his debut novel, Ghostman, an addictive page-turner about a man with no name, no connections, a face you won't recognize and certainly won't remember—he doesn't even have fingerprints. This polished criminal is called to Atlantic City to "fix" a casino heist gone wrong, with the FBI and a cadre of crooks on his tail.

Now working on the sequel to Ghostman, the Portland-based Hobbs shares his writing roots with Goodreads, including the first chapter of his thesis about the grand master of detective writing, Edgar Allan Poe.

The first chapter of Hobbs's senior thesis.
Goodreads: How did you turn yourself into a heist expert?

Roger Hobbs: First things first: Ghostman is a work of fiction, and many of the techniques I describe I either embellished for artistic purposes or made up entirely. That being said, however, I did two years of research while writing this book. My approach was multifaceted. I taught myself four different techniques for breaking into and hot-wiring a car. I scoured used bookstores for those few rare tomes about safecracking and lock picking. I downloaded and studied manuals describing all sorts of criminal methods, from body disposal to making car bombs. I hung around in hidden, deep Web chat rooms with working thieves and hit men. I traded cigarettes for stories in after-hours clubs with thugs and ex-cons, pimps and drug dealers. I cased the security in every single casino in Atlantic City. Honestly, I did everything I could for this novel, short of actually breaking the law.

GR: Are there any real-world heists that impress you?

RH: There was a five-guy crew called the "School of Turin" that took down a diamond vault in Antwerp in 2003. They stole more than $100 million in gems and precious metals from a security center that was thought to be impenetrable. The thieves took so many diamonds that they couldn't even carry them all out and had to leave some behind. The place had every security measure you can imagine, too—multiple custody locks, infrared detectors, seismic sensors, Doppler radar, magnetic locks, and a private security force. The diamonds disappeared without a single alarm going off. Some of the crew was eventually caught because of DNA evidence, though, but the fortune has never been recovered and one guy is already out on parole. Ask yourself: Would you spend ten years in jail for a $20 million cut? 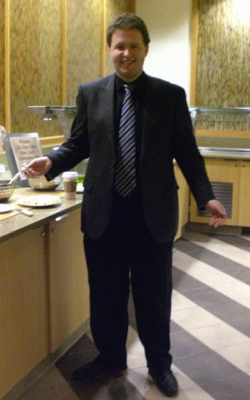 Suit-enthusiast Hobbs photographed in the Reed College lunchroom, where he wrote much of the book.
GR: Wheelman, boxman, jugmarker—with so many criminal specialties, what was your inspiration for using a "ghostman" as the linchpin of your story?

RH: Ghostman is the only one that isn't real. To my knowledge, there's no such thing. I made it up. All the other specialties, however, like wheelman and boxman and jugmarker, are real terms used to describe real people. Ghostman, however, is something entirely novel—a thief whose first and only priority is making sure that everybody gets away with it. I liked that.

All the other roles of a professional heisting team are holdovers from the 20th century, when it was significantly easier to pull off large-scale robberies like this. Back then criminals were celebrities, with names like Dillinger and Floyd and Sutton. The heist game isn't like that anymore. Modern criminals of every ilk rely on identity theft and the anonymity of the Internet to protect themselves from the ever-encroaching, all-seeing eye of the state. Ghostmen are the ultimate evolution of that trend—they have no names, no faces, no papers, and no attachments. I wanted to write a story about a man like that. What would his life be like? What would motivate him? How would he fall in love?

GR: How do you balance a protagonist who is both a criminal capable of violence and a relatable character whom readers want to root for? 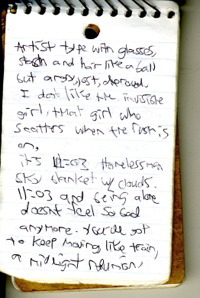 Hobbs's writing notebook, which he keeps with him at all times.
RH: There is a cardinal rule for antiheroes, and I followed it: An antihero needs an enemy who is even worse than he is. I don't think readers will mind if Jack is a career criminal once they read about his antagonists, Marcus Hayes and The Wolf. "Good guy" and "bad guy" are relative terms, after all. Jack looks positively angelic compared to the scumbags he's up against. Plus, aren't bad guys just plain sexier than good guys?

GR: Will there be more Ghostman books? And if so, will we get to see more of Jack's mysterious mentor, Angela?

RH: There will definitely be more Ghostman books. I won't speak to the fate of Angela, but I can say that the next book will have you flipping back through Ghostman for clues.

Am curious about this ghost man book

just finished the book and found it a good matinee afternoon read. The character is relatively well developed but not necessarily memorable like a Harry Hole.
The story is episodic moving from one quick adventure to another but certainly not in the class with Jason Bourne.
The badd guys are really bad, and Hobbs goes to great length to describe graphically what they do to be considered worse than the Ghostman.
All in all a quick read like an old 'B' movie at aSaturday matinee.

Well I think Ghostman is just great. And don't pay any attention to the NY Times review. She wishes it were a different book. Oh, well...

Hobbs takes us for a fine ride inside a secret world that's behind the curtain. I'm looking forward to more.