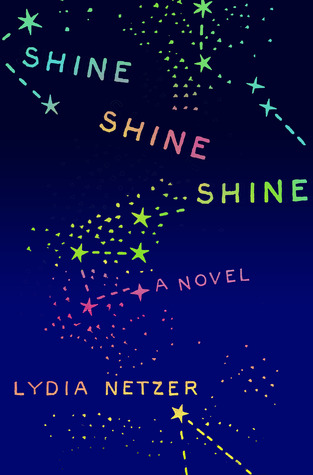 Debut author Lydia Netzer proclaims, "I love weirdos. And the reality is that we're all weirdos." Her novel, Shine Shine Shine, examines what happens when a unique woman stops trying to fit in. Born completely hairless, suburbanite Sunny Mann hides her baldness under a blond wig and her family's quirks from her neighbors. Pregnant with her second child, the heroine cares for her autistic son and terminally ill mother while her socially awkward astronaut husband is stuck in space on a moon mission gone wrong.

Virginian writer Netzer is now working on her second novel while homeschooling her two children. She shares with Goodreads a film, a song, and a photograph that inspired the components of Shine Shine Shine. 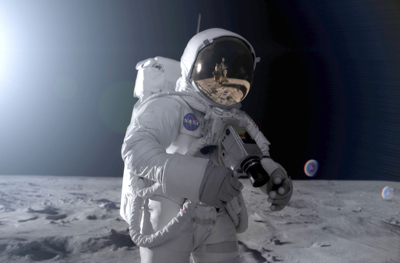 I watched this movie, Magnificent Desolation: Walking on the Moon 3D, with my family at the Kennedy Space Center in Florida. Everything about it inspired me, including that magical quote from Buzz Aldrin on stepping out onto the moon: "Beautiful, beautiful. Magnificent desolation." (Still from the film. Photo: © 2005 IMAX Corporation and Playtone.)
Goodreads: Goodreads members are shelving your book as both "romance" and "science fiction." What did you set out to write, and how different is the final version from where you started?

Lydia Netzer: I definitely did not set out to write science fiction. I don't think Shine Shine Shine counts as real sci-fi, although it does have robots, math, a rocket to the moon, and NASA. And titanium. What percentage titanium does a novel have to be in order to qualify?

I did set out to write a love story, and all the sci-fi elements stemmed from my male main character Maxon's choice of job. He started out as a day trader, plugged in to his computer all the time, and no one went to the moon at all, or even thought about it. Then he became an A.I. programmer, and then an astronaut, and everything else stemmed from that. I got very interested in how programming a robot was like raising a child, how math-brained people are an evolutionary step toward an era of space travel, and how human interactions can be understood and explained with math equations and code snippets. Having said all that, the love story of the novel is still its heart and is still the most interesting piece for me. The way people fall inexorably, completely, terribly in love is a much more mysterious question than the secrets of the galaxy. 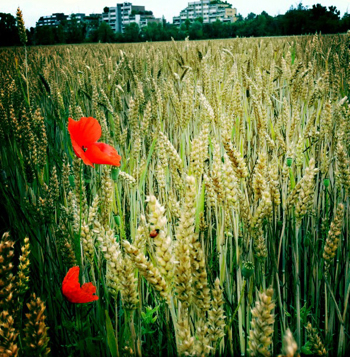 Loire Valley, France.
GR: What does this photo represent?

LN: We were driving through the Loire Valley in France a couple of years ago before I had finished the last draft of my book. I kept seeing these beautiful fields of grain, all regimented and tidy and waving in the wind. The fields were poppies growing randomly, invading the rows. The image of this aberration just captivated me in a way I couldn't define, and one day I told my husband to pull over. As I stood there on that roadside in France, I had a lightning bolt epiphany: This is how Maxon sees himself and Sunny. This is how he understands their relationship. He can't really explain it, or put it into beautiful words, but this is how he sees it. This picture was taken by my husband, Dan. It inspired Maxon's poem, which appears in the front pages of the hardback.

GR: Sunny feels great pressure to be "normal." How much of this stems from her role as a mother, specifically the mother of a special-needs child?

LN: People have all kinds of good reasons for wanting to pass as normal and have others see them as acceptable. Keeping a job, not freaking out your parents, forgiving yourself. In fact, parenthood can really drive you in this direction—toward stuffing down all your crazy and packing it away, presenting a very peaceful, unremarkable face to the world. Having a kid who's weird makes you even more committed to being very unweird, because you feel like the kid has enough problems without also having to deal with your issues. The parent of a special-needs child spends a lot of time trying to make the world safe and predictable for the kid—and sometimes that transformation can start with the parent's own personality and life.


"This song, 'Shine,' by Carbon Leaf, inspired the title of the book. And I have to admit to some fist-pumping sing-along action while I was powering through some of the scenes toward the end of the book."
When I first became a mother, I was terrified that I was too strange, too eccentric, that I wouldn't know what to do with a baby, how to make it happy, how to keep it safe. I had the most ridiculous but urgent obsessions: making lasagna from scratch, quilting by hand, hosting lunches with proper china, planting bulbs. I made a brave run at becoming a perfect mother, or at least one whose kitchen would legitimately smell like cookies and whose pantry would be full of organized plastic containers. I did figure out—and it took several years and also writing this book—that my efforts in that direction were not only doomed but also unnecessary. My kids showed up in my uterus, they got me for a mother, and I myself am the one most suited for the job because I myself am the one who showed up. Me: eccentric, strange, neurotic, not knowing how to make lasagna.

No one sets out wanting to be the weirdo mom or the freak dad. It's a status you have to come to grips with over time, sometimes after all attempts to disappear into normalcy have failed. But when you do finally get there, you can sort of relax into the idea that you were exactly the parent your kid needed the whole time.

A lot of wise here.

I'm about to be a mom for the first time myself, and I admit to struggling a little bit with my own weirdness in preparing for that role. Thankfully, I have oh-so-many friends and role models to encourage me to just be my oddball, nerdy, silly, ridiculous self and know that passing on some of those things is not only OK, but probably good.

Can't wait to read this book!

I have this book for review & can't wait to read it

Your ideas of acceptance of who you are go well beyond just being weird. That's something so many people never come to grips with and thereby diminish to a great extent the wonderful person they would otherwise discover. I'm glad you put that concept out there.

And you book sounds very original and interesting.

Your ideas of acceptance of who you are go well beyond just being weird. That's something so many people never come to grips with and thereby diminish to a great extent the wonderful person they would otherwise discover. I'm glad you put that concept out there.

I have this book for review & can't wait to read it

Your ideas of acceptance of who you are go well beyond just being weird. 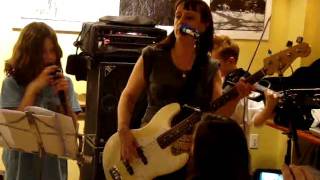