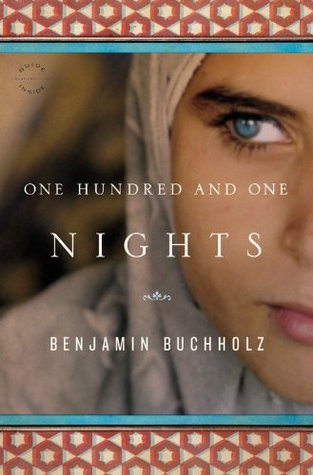 In 2005, U.S. soldier Benjamin Buchholz deployed to Iraq as a civil affairs officer, a liaison to the local community in the border town of Safwan. His impression of that war-ravaged country is encapsulated in his "cathartic" debut novel, One Hundred and One Nights. Narrated by an Iraqi mobile phone salesman named Abu Saheeh who has returned to his native country after many years in the United States, the story is a revealing look at everyday life in an Iraq permeated by an inescapable undercurrent of violence.

After recently completing an additional assignment in Oman, Buchholz is currently working on a master's degree in Near Eastern studies at Princeton. He also writes a Middle East culture blog, Not Quite Right, and is drafting his second novel. Buchholz shares images from his time in Safwan, Iraq, and talks with Goodreads about the bustling milieu of the Middle East. 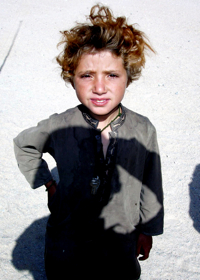 A child in Safwan, Iraq (photo by Benjamin Buchholz, Thirteen Stares).
Goodreads: In One Hundred and One Nights, the main character, Abu Saheeh, befriends a bright young girl named Layla, who visits his shop in Safwan market. What inspired this unforgettable character?

Benjamin Buchholz: The two main characters in One Hundred and One Nights, Abu Saheeh and Layla, evolved as I tried to process the events I had witnessed at war in Iraq. For the character of Layla, it was the death of a young Iraqi girl on the roadside in Safwan. She was struck accidentally by one of our convoys as she ran to fetch a water bottle thrown to her by a semi driver. The image of her haunted me, cropping up in my writing time and again. In fact, for a while I thought she was a figment of my imagination, a fiction I had created as I willed myself to forget the death of the real little girl.

GR: Is there a connection to the Arabic-language classic, The Arabian Nights: One Thousand and One Nights?

BB: The Arabic transliteration of "One Thousand and One Nights" is "Alif Layla wa Layla," literally: "One Thousand Nights and a Night." Therefore, the Arabic version of "One Hundred and One Nights" comes out as a nice little double entendre—"One Hundred Nights and Layla." I have a beautiful, first edition copy of the entire Arabian Nights in an honored place on my bookshelf—20 green, musty, vanillin-smelling folios. It's a tough read, but its stories have had an undeniable influence on literature, especially on romantic notions of the Middle East.
I purposefully set out to mirror the frame story for The Arabian Nights; the Scheherazade character tells an incomplete snippet of a tale each evening (in order to prolong caliph Harun ar-Rashid's interest in her and thereby also prolong her life). Layla is doing the same thing, especially in the beginning of the novel. Whether this occurs because Layla thinks of herself as a latter-day Scheherazade or whether this similarity is something projected on her by Abu Saheeh, I can't really answer. The most definite thing I can say, on Layla's behalf, is that if she had a choice to speak for herself she'd likely choose a Britney Spears or a Madonna for her role model rather than some dusty old concubine from the pages of her own culture's flowering. 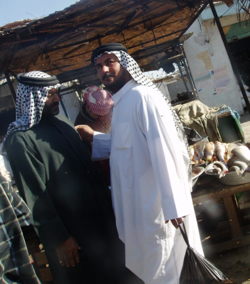 BB: For Abu Saheeh, the process occurred more slowly as an amalgamation of ideas and people and situations. I have a photograph of a man in the Safwan fish market [left] which, to me, represents Abu Saheeh: demographically different from most other men in the town, a keen light in his eyes, a conspiratorial grasp on his companion's cloak. One of the Iraqis with whom I worked in Safwan mentioned in an offhand manner that he had been trained as an Etruscan archeologist and had come back to Safwan to help the town rebuild. That idea stuck with me. Although Abu Saheeh isn't an archeologist, I borrowed this sort of complex transnational perspective when creating him as a physician schooled in America. This allowed me to get inside Abu Saheeh's head better, to show the tension that must be in him between the highly invasive aspects of American culture and his subsequent return to more traditional values.

Writing his character was an adventure in trying to understand a truly foreign perspective. I hope my adventure succeeds and that Abu Saheeh's character rings true.

GR: How did your interaction with the local community of Safwan, Iraq, inform your fiction writing?

BB: Safwan is a town of perhaps 30,000 people located right on the border of Kuwait and Iraq. Its civilian border crossing serves as one of the main points of commercial transshipment into the country. It had, at one time, been a stopping place for two-way travel, with Kuwaitis coming north for holiday and Iraqis going south. All that remains of those heady days are the memories of some of the older citizens and a few broken-down riches, like the mermaid fountain in the town square. 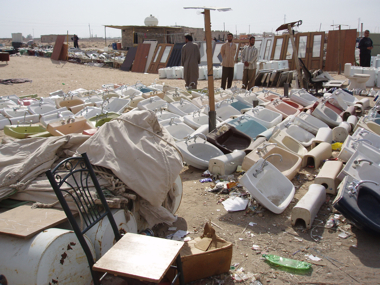 A shop in Safwan market (photo by Benjamin Buchholz, Thirteen Stares).
Because of the scarcity of many goods, especially electronics, flourishing quasi-legal markets grew up around Safwan in at least two locations, one just outside the civilian border crossing compound (where, sometimes, if watching closely, a person might see smuggling in action: a couch or something similar plucked off the back of a flatbed truck and quickly handed over the barbed wire fence directly into the market), and another, bigger marketplace that sprang up right smack in the middle of the cloverleaf highway interchange to the north of town. This is where I have situated Abu Saheeh's mobile phone business. These markets sold everything: sinks, doors, concrete, propane, mobile phones, satellite dishes, chicken, kitchen utensils, you name it. And shoppers flooded south from Az Zubayr and Najaf and Kufa and ar-Ramadi and even Baghdad to buy the cheap smuggled goods. It was a fascinating town to work in. I feel like its dust and its heat and its vibrancy, the sense that life there continues despite all manner of hardships, impregnates everything I've written.

Can we find a copy in Saudi Arabia or any other Arabic country? thanx

In Arabic? Likely no, not yet. Unsure as to the english version's availability in Saudi bookstores. There's always Amazon.com though!

oh it's a good idea to buy it online :) thanx

All the summaries of these good books I read on twitter whet my appetite,but the question is how do I get copies of these books in NIGERIA?

In Arabic? Likely no, not yet. Unsure as to the english version's availability in Saudi bookstores. There's always Amazon.com though!