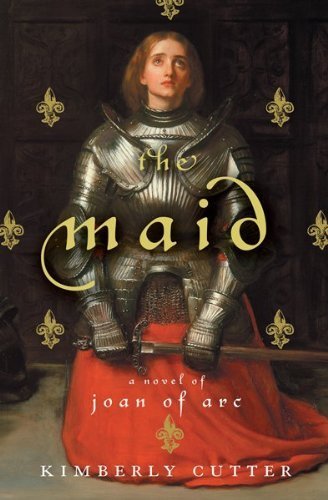 Fearless in battle, resolute in her faith—Joan of Arc is the stuff of literary and ecclesiastical legend, but she was also a very real girl from the northeastern countryside of France who died at age 19 in 1431. One of the most studied women of history, the saint also captivated debut novelist Kimberly Cutter, who recounts the bloody warfare and nasty politics of France's past through the eyes of young Joan herself. For Cutter's historical novel, The Maid, she researched and traveled to France to retrace Joan's path from her birthplace in Domrémy to Rouen, where she was burned at the stake.

Cutter launched a successful career in journalism after earning an MFA in fiction writing from the University of Virginia. While writing for W, Harper's Bazaar, Vanity Fair, and Marie Claire, she continued to search for a fictional subject. The author shares a silent film and a painting that evoke the emotional life of her muse, Joan of Arc.

The Passion of Joan of Arc (1928), directed by Carl Theodor Dreyer
Goodreads: How did you become interested in Joan of Arc's life?

Kimberly Cutter: I wanted to write a novel about a woman who had actually lived—someone who had had a big, thrilling, adventurous life that hadn't been fully brought to the page before. There were a number of women I considered as subjects, but once I read Joan of Arc's story, the others just fell away. I couldn't get over the fact that an actual flesh-and-blood teenager—and an illiterate peasant at that!—had done the things Joan did: convinced the French king to put her in charge of his army, led 10,000 men into battle, raised the siege of Orleans, and turned the tide of the 100 Years War. I thought, this is the most amazing woman who ever lived. I can't believe this actually happened. I have to tell her story. Joan of Arc had an incredibly thrilling, visceral, mysterious, pulse-pounding life, and I wanted to re-create that experience for the reader. 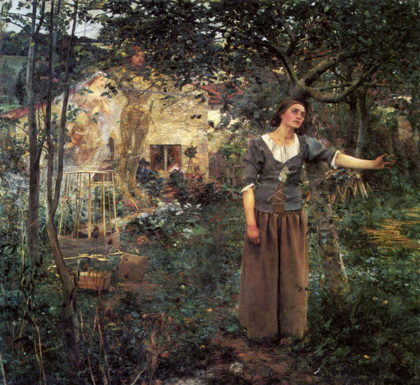 Joan of Arc (1879) by Jules Bastien-Lepage (Metropolitan Museum of Art)
GR: Her achievements were astonishing for a woman of her century, social class, and education. What unique circumstances allowed her to accomplish what she did?

KC: Two things, primarily. Firstly and most importantly, Joan of Arc had this unshakable conviction that God had given her the mission of saving France. She believed it with every fiber of her being, and that kind of belief is a very powerful thing. Secondly, France had simply run out of options. They'd been beaten down by the English for 70 years at that point, their king was cowering in exile down in the Loire Valley, their army was completely demoralized, everyone had lost their faith, and then suddenly into their midst came this young peasant girl who was basically the embodiment of faith. She restored their spirits and their will to fight for their country. She made them believe again.

GR: In your work as a contributing editor for publications like Marie Claire and W, you have profiled many young women in the public eye, including Taylor Swift, Mary-Kate Olsen, Angelina Jolie, Jennifer Aniston, Casey Johnson, and Miley Cyrus. What have you observed about the impact of fame? How did Joan of Arc's notoriety change her?

KC: I think fame puts an enormous amount of emphasis on the individual, which can be a really tricky thing to handle. It's easy to get an inflated idea of your own importance. For Joan, the pressure to perform became enormous: It brought out her temper, her ego, and ultimately made it impossible for her to hear her inner "voices"—which brought about her downfall.

Most of the celebrities I've interviewed (with the exception of Casey Johnson) seem to handle their fame amazingly well—but of course, I'm only spending an afternoon with them!

Jehanne D'Arc has always been someone I have admired for her courage & ability to do the seemingly impossible...for her time and most especially because she was a woman...and a very young woman at that.

I totally fell in love with Dreyer's silent film "The Passion of Joan of Arc"...definitely the best film about her to date! Actually, all Dreyer's films are awesome.

Joan was captured. Why wasn't she ransomed as so many males were? Or is being female the reason? Joans' story is so astounding why is so little about her life taught? I mean very few people know much or anything about her. OK I will stop.

Hello Kimberly. Having researched the life of Jehanne, La Pucelle for over a decade, I agree with everything that you've said here with one exception. "It (pressure to perform) brought out her temper, her ego, and ultimately made it impossible for her to hear her inner "voices"—which brought about her downfall." Joan did not suffer fools gladly, but her downfall resulted from other causes. My bio on Joan, "Joan of Arc: The Mystic Legacy" will be released later this month. I look to Joan's sworn testimony as the most reliable historical resource for comprehending her life story, which Steinbeck said "...is a fairytale so improbable that, without the most complete historical record and evidence, it could not be believed. If a writer were to make it up the story would be howled down as an insult to credulity." Joan said, under oath, that she had never had need of her voices and not had them. We also know that she ignored their admonishments, when she was warned not to jump from the approximately six story height of her prison tower in Beaurivoir, that her voices did not advise her to attack Compiegne, and that her abjuration resulted from "fear of the fire," following months of trial and imprisonment. Her life was constantly threatened after her capture; both within that prison cell, and as she stood before the ecclesiastic court, accused of heresy and witchcraft. With a verdict of "guilt" coming in from the University of Paris, and having being shown the instruments of torture in Rouen, used as a means of extracting confessions from accused heretics, Joan was finally pushed beyond all limits of human endurance. She was not an egoist; but certain, direct, and consistent in her belief that she was "born for this" purpose. She resisted her martyrdom until the day of her death. From the moment she entered the public arena, each day was for her, the equivalent of Moses parting the Red Sea. @Richard, excellent questions! The goal of my bio is to answer them.

Kim,
I will be so glad to learn some answers. Thanks for mentioning I could find the answers in "The Mystic Legacy".

I look forward to reading both of these books. Thanks to the authors for their hard work!

I have always been interested in learning more about Joan of Arc. Last year I read The Virgin Warrior by Larissa Taylor and loved it. Can't wait to get my hands on both of these books!

Reading one book about Joan's life often leads to seeking out another, and another. I look forward to reading Kimberly's novel,"The Maid" a.s.a.p. Each author's interpretation of this timeless story is unique.

She was imazing for standing up for her convictions to take action whatever it took.

Thanks to the authors for their hard work!

I look forward to reading both of these books. Thanks to the authors for their hard work!